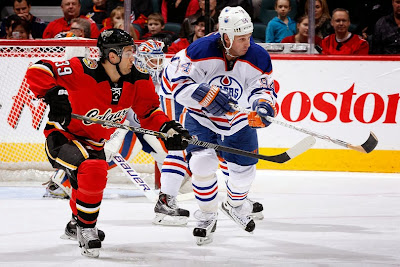 Only one word comes to mind when describing last night's match up between the Calgary Flames and Edmonton Oilers...and that word is painful. With both teams returning to action following a league wide three day hiatus for the Holiday Season, the longtime provincial rivals managed to put together about as boring a game as one would ever care to witness.

Ryan Smyth played the role of hero, scoring both goals, as the Oilers did what was necessary in earning a 2-0 win over about as vanilla a roster as one will find in the entire NHL. Devan Dubnyk made twenty-seven stops in earning his second shutout of the season, though the big man was hardly tested in picking up just his tenth win on the year.

Despite this one being about as invigorating as watching a freshly painted basement dry for two and a half hours, it was a bit of a stepping stone for Dallas Eakins' group. Typically, that is the sort of game this team would find a way to lose. However on this night, the Oilers would use a couple of fortunate bounces to their advantage and skate away with two points in their back pocket.

In a perfect world, fans want to be entertained by whatever team they follow, regardless of the sport. Unfortunately in today's world of overly defensive system play, that isn't always the case. That said, good teams find a way to win ugly, which is something this team was seemingly incapable of accomplishing...until last night.

With their win over the Flames, Edmonton improved their record to 13-24-3 on the season. They will reach the midway point of their schedule when they host the Philadelphia Flyers tonight at Rexall Place. Regardless of this evening's outcome, this team will still find themselves in the basement of the Western Conference standings. Heading into this season, no one thought this team would be this bad...and I mean no one.

Their season has pretty much been done since the first week of November but over their last six weeks, this group has found a way to beat teams they have no business losing to. Over their last twenty games, Edmonton has posted a 9-10-1 mark. Those nine wins game against Calgary (x2), Carolina, Colorado, Columbus, Dallas, Florida, Nashville and Winnipeg and they also picked up the loser point in an overtime loss to the Flames. From that group, only the Avalanche currently hold down a playoff spot and the Oilers have had their number for some time...especially when the two meet at Rexall Place.

On the flip side of the equation, their ten losses have come at the hands of Anaheim, Boston, Chicago, Colorado, Columbus, Los Angeles, Phoenix, St. Louis, San Jose and Vancouver. Outside of the Blue Jackets, whom the Oilers dropped a tough 4-2 decision to on the road, each and everyone of those teams are firmly planted inside the playoffs. Are you noticing a bit of a pattern here?

For the first time in ages, it appears as though Edmonton has found a way to no longer play down to the skill level of certain opposition and give away points they should be banking. Unfortunately for Dallas Eakins and his coaching staff, they have gone in the complete opposite direction against the better teams in the National Hockey League.

More often than not, you could pretty much count on the Oilers bringing their "A" against the so-called elite. While they usually fell short of winning many of those games, they were in the vast majority of them. That hasn't been the case this year, as the NHL's best have put the boots to the Oil on a far to regular basis.

It has definitely been tough to watch and likely far more difficult to live through but perhaps the opening forty games of this season were a necessary evil for this group to move forward. Losing as much as this team has sucks for everyone involved but learning how to win isn't easy. In my mind, that was something this organization felt would just take care of itself.

With that being the case, perhaps this year's results should not have been that big of a surprise. One thing is clear, the losing has to stop. Learning how to win is step one and it looks as though the 2013-14 edition of the Edmonton Oilers may finally be headed down the right path.
Posted by Oil Drop at 10:43:00 am