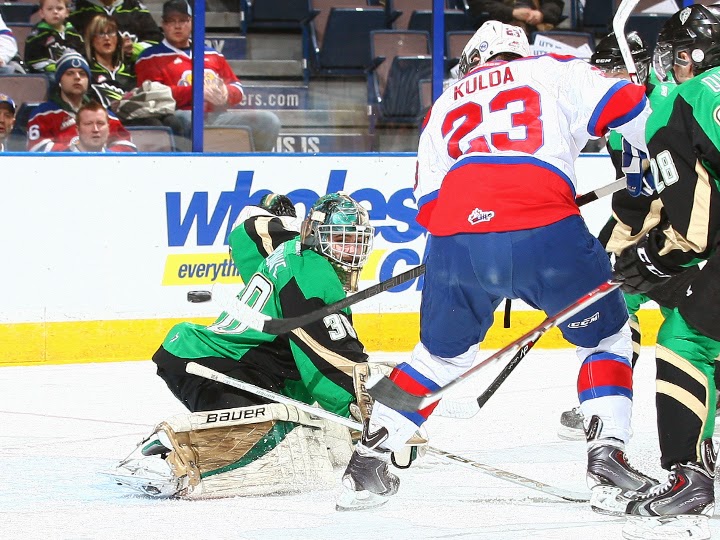 Defenceman Dysin Mayo led a third period comeback over a game Prince Albert Raiders side with a two point effort, including the eventual game-winner, in what was a hard fought 3-1 victory for the Eastern Conference regular season champs.

Netminder Tristan Jarry continued to make life difficult on the Raiders and their highly touted superstar Leon Draisaitl, stopping thirty-one of the thirty-two pucks fired his way, and placing the Oil Kings in the driver’s seat of their first round WHL Playoff Series.

With Edmonton now up 2-0, the two teams will make their way to Prince Albert for games three and four starting on Tuesday night at the Art Hauser Centre. After being thoroughly outplayed in Saturday afternoon’s series opener, the visitors were in this one from start to finish and looked to be in good shape after Dakota Conroy slid home his second goal in as many games…all of twenty seconds into period three.

With a series opening road split less than twenty minutes away from becoming a reality, the Raiders pushed the pace over the final frame but the Oil Kings would have the last laugh. Riley Kieser pulled Edmonton back on level terms with a power play marker at the 8:06 mark, courtesy of a great feed from Game One hero Brett Pollock.

Just over four minutes later, Mayo would complete the comeback with his second goal on the weekend, as the blueliner’s point shot found its way through traffic and in behind Raiders netminder Cole Cheveldave. In the blink of an eye, one goal deficit had been turned into 2-1 advantage.

Luke Bertolucci would close out the scoring with four and a half minutes left in regulation, pouncing on a juicy rebound and knocking home his first of the post-season off Cheveldave’s pad from a rather sharp angle. It was tough seven minute stretch for the Prince Albert starter, who allowed three third period goals against on just eight shots, after going a perfect twenty-four for twenty-four over the opening forty minutes of action.

Curtis Lazar was held off the scoresheet after putting together a three point effort in the opener but the Ottawa Senators 2013 first round pick continued to impressive with his work on the defensive side of the puck. Lazar has been the main reason why Edmonton has been able to limit Draisaitl to just a pair of assists over the first two games.

Anytime you can hold a 105 point man in check you would have to like your chances of winning and at least to this point in the series, the Edmonton Oil Kings have done exactly that.
Posted by Oil Drop at 10:33:00 am