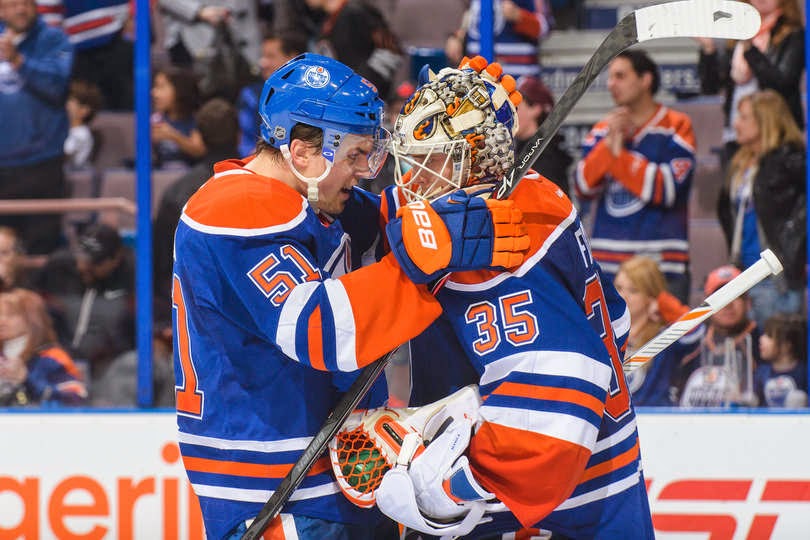 While the Edmonton Oilers have come out with four consecutive solid efforts against teams either comfortably in or battling for a playoff spot in the Western Conference, it has been the play of the opposition’s netminder that has ultimately handed Dallas Eakins’s side back-to back victories.

Last night’s 4-2 win over the Anaheim Ducks was exactly what this team needed from a confidence standpoint but at the same time, it was exactly what they didn’t need in the standings. While losing a few more games may not be such a bad idea, contrary to what many seem believe, these players actually do want to win games and likely no one wanted these points more than the guy wearing #35 in Orange and Blue.

After dropping a tough 3-2 decision in his return to Anaheim early last week, Viktor Fasth rebounded with an even better performance against his former mates on Sunday night, earning his fifth win on the season and third in Oilers silks. The thirty-one year old didn’t do anything overly flashy in stopping thirty-four of the thirty-six pucks fired his way but he was his usual steady self in between the pipes.

Outside of making one hell of a lunging glove save off former Oiler Andrew Cogliano during the opening twenty minutes of play, Fasth never called upon to make that highlight reel stop but he most certainly looked to be in complete control from start to finish. That was a far cry from what was going on down at the other end of the rink, where Jonas Hiller ultimately cost his team what could turn out to be a couple of crucial points in the race for top spot in both the Pacific Division and Western Conference standings.

After allowing four goals against on just nine shots in Friday’s loss to the Nashville Predators, Hiller looked out of sorts from the drop of the puck. While he did manage to keep the Oilers off the scoresheet in the first period, he allowed three pucks to get behind him in period two and frankly looked god awful in doing so.

Neither one of the Oilers first two goals had any business going in. Both Taylor Hall, whose three point effort moved him into sixth in league scoring, and David Perron cashed in on their good fortune to score their twenty-seventh goals of the season. Justin Schultz would complete the three goal outburst late in the frame, poking home a loose puck for his second goal in as many games, as Hiller lost sight of the puck during a goal-mouth scramble.

In what felt like a blink-of-an-eye, Edmonton had turned a one goal deficit into two goal advantage and were suddenly in the driver’s seat heading into the second intermission. Anaheim bounced back with a strong third period but were only able to beat Fasth one on occasion, as Cory Perry deflected home Ryan Getzlaf’s point shot up and over the Oilers starting tender.

For at least one night, Dallas Eakins’ crew not only won the goaltending battle but they also managed to turn the emotional tide in their favour courtesy of three separate second period scraps. Whether you are a fan of fighting or not, there is no questioning the fact this game turned the moment Steve Pinizotto was done delivering a major beat down on Anaheim's Matt Beleskey all of 1:35 into period two.

From that point on, Rexall Place would be jumping and Edmonton had grabbed the visitor’s attention. Forward Patrick Maroon came looking for redemption mere seconds after Hall tied things up 1-1 and Matt Hendricks more than held his own against a far bigger opponent. However the shoe would be on the other foot before the period was out, as Maroon would have to answer the bell against Mark Fraser and the Oilers rearguard wasted little time in sending a message to both the twenty-five year old winger and the rest of his teammates.

It may not have been the outcome all Edmonton Oilers fans were hoping for but at the end of the day, this team showed a lot in earning what were essentially two meaningless points. That said, we have all seen this song dance before and come next October...none of this will matter
Posted by Oil Drop at 8:54:00 am