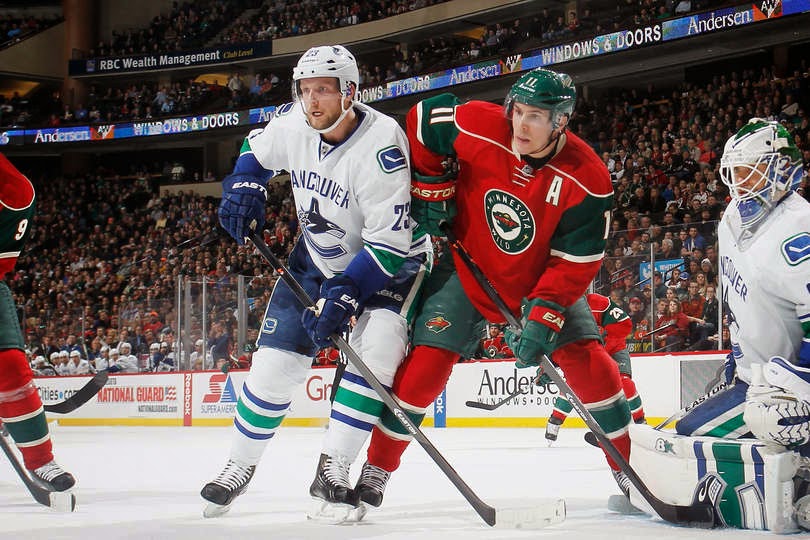 It ultimately cost both general manager Mike Gillis and head coach John Tortorella their jobs and left many a Canuck fan wondering where their team was headed. Was it time to embrace a re-build or look forward to a re-tooling? While ownership and the now former GM managed to make a mess out of their goaltending situation, this lineup is nowhere near as good as the one that made their way to the Stanley Cup Final just three short years ago.

That said, they are a team that still has Daniel and Henrik Sedin upfront as well as centre Ryan Kesler, though he will likely get his wish and be shipped out of town prior to the start of the 2014-15 campaign. Vancouver still has a solid backend with veterans Kevin Bieksa, Alex Edler, James Garrison and Dan Hamhuis as well as impressive youngster Chris Taney.

Is there current roster good enough to compete with the likes of the Anaheim Ducks, Los Angeles Kings or San Jose Sharks over the course of an 82 game National Hockey League schedule? Not likely but that doesn’t mean their roster needs blowing up. However, some minor tweaking won’t get this team where new President of Hockey Operations Trevor Linden wants them to be.

By the sounds of it, Linden will be naming former Canucks defenceman Jim Benning as the club’s new general manager later today and with it, the quest to improve the talent within the organization will become priority number one...which is an approach most Vancouver fans are probably more than ok with.

As tough as this year has been on both the club and its fans, it allowed the organization to secure a top ten pick at next month’s NHL Entry Draft for the first time since taking Cody Hodgson tenth overall in 2008. Now they did take London Knights standout Bo Horvat at number nine during last year’s draft but there was one big difference....it cost them Cory Schneider

With Vancouver sitting in the number six hole, one would think they would have real interest in potentially moving up even higher on draft day. You can bet both Sam Bennett and Sam Reinhart are high on the Canucks wish list and chances are one of the two will still be available when it comes to the third overall pick.

From what we hear, Edmonton have the eyes fixed on two players...Aaron Ekblad and Leon Draisaitl. Some seem to feel the Barrie Colts blueliner could slip out of the top two but I wouldn’t count on it. If it came down to one of Bennett/Reinhart or Draisaitl, the Oilers would almost certainly lean towards the Prince Albert Raiders centre. Most would seem to disagree with that line of thinking but they are not the ones running the team.

Problem is, outside of the Orange and Blue, the big German hasn’t really been mentioned as a likely target for any of the other teams drafting inside the top five. With that being the case, would not swapping picks with a team like Vancouver, while getting something to help the team in the here and now, not make sense? My guess is the Canucks would jump all over the opportunity of grabbing either one of the two Sam’s but there would definitely be a cost involved in making such a move possible.

Now MacTavish could pull a “Mike Gillis” and ask for the sun and the moon, as the than GM did in his trade demands for Schneider, but I honestly can’t see that happening. However, what might make sense is a deal involving the picks and a pair of defenceman.

To Edmonton
Alex Edler and the Canucks 1st rounder (#6)

To Vancouver
Martin Marincin and the Oilers 1st rounder (#3) The Canucks have always been high on Marincin and he was the additional piece they coveted from Edmonton in any potential dealing involving Schneider deal, on top of the seventh overall pick and a second rounder. Understandably, MacT declined but acquiring a player like Edler at the age of twenty-eight and signed long term, five more years at $5 million per, the idea would certainly be one the second year general manger would have to seriously consider.

From an Oilers standpoint, it would be hard to give up on a kid like Marincin but with a plethora of young blueliners already in the system, moving one to get a proven commodity seems to be a no-brainer. Edler would immediately become Dallas Eakins’ #1 guy and his presence alone would life for the likes of Jeff Petry, Justin Schultz, Andrew Ference and Oscar Klefbom that much easier. Some have soured on the big Swedish rearguard but he is still one hell of a player.

On the other side of the equation, making such a deal would kill two birds with one stone for the Canucks. While Marincin may not be in Edler’s class just yet, the potential does exist for him to become an even better player. The young Slovak was fantastic in his initial run through the NHL in 2013-14 but he still has a long way to go before reaching his peak.

Having said that, insulating him with guys like Bieksa, Garrison and Dan Hamhuis, while having another up and comer in Taney already in mix, would allow Vancouver to not force feed him minutes…something which does not exist in Edmonton. Also, let’s not forget the former second round pick is still only twenty-two years of age and currently makes all of $730,000 on the last year of his entry level deal.

Of course the other part of this is bringing in a young centre who the organization can build around in the future. Grabbing a player with Reinhart’s skill-set or Bennett’s desire and drive to be the best he can be would go a long way in helping them secure their future but as I mentioned earlier, it won’t come cheap.

Edmonton is in the same boat but they need a completely different type of player. Edler would fit that need and by the sounds of it, they would still get the kid they were after in the draft. It would be a win-win for both sides…now they just need to make it happen. Of course the wild card in all of this is Ekblad but if Craig MacTavish can’t get his hands on the young blueliner, turning his attention towards the Vancouver Canucks and Alex Edler might just be the way to go.
Posted by Oil Drop at 4:35:00 pm