The Draisaitl, Perron and Pouliot Experiment 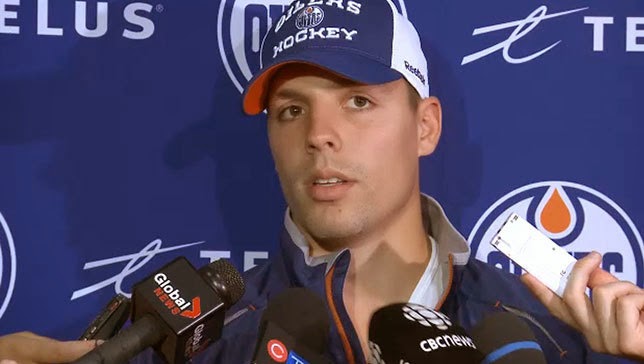 The moment Craig MacTavsih announced the Edmonton Oilers signing of winger Benoit Pouliot to a five year $20 million deal, it was obvious the role in which the organization envisioned using the former New York Ranger during the upcoming 2014-15 season.

While some were holding out hope that Nail Yakupov would be given a shot at earning a top six role out of camp…that was likely never going to be an option for Dallas Eakins and his staff.

Bringing in a player with Pouliot’s skill-set and experience to a team that has quite literally been starving for a veteran presence that can make an impact on a nightly basis made perfect sense but the moment Edmonton agreed to cough up the sort of coin and term that they did, the bar was set.

With that being the case, it should have surprised no one to see Eakins immediately place the former fourth overall pick on a line with Leon Draisaitl and David Perron. At least for time being, it appears as though the second year coach has given up on the notion of trying to use Jordan Eberle, Taylor Hall and Ryan Nugent-Hopkins on separate lines.

With the “Big Three” set to start the year as a trio, the Oilers second line is going to have to be able to hold their own at both ends of the ice, making the decision of turning to a potential unit of Draisaitl, Perron and Pouliot as somewhat of a no-brainer. While the kid may not be ready for “Prime Time” the other two are at the stage in their careers where they should be able to help a young player along the way…though we should all expect to see more than a few growing pains along the way.

In a perfect world, the organization would love to see the third overall pick assert himself throughout training camp and wrestle away the second line centre role away from Mark Arcobello. Now there is absolutely no guarantee that will happen and to be honest, either one will have a tough time in such a role but the chances of that line not featuring No. 57 and No. 67 on the wings are almost nil.

While giving the likes of Boyd Gordon and Matt Hendricks a large majority of the defensive zone draws and assignments is all well and good, those guys are bottom six forwards and should be used as such. The challenges this club will be facing down the middle of the rink are obvious and this coaching staff is hoping the duo of Perron and Pouliot will be able to carry the mail and do much of the required heavy lifting.

We should get out first glimpse of the trio playing second fiddle to the RNH line during tonight’s pre-season opener against a Calgary Flames split-squad over at Rexall Place and for their sake, hopefully they can find some instant chemistry and carry it through to the start of the season on October 9th against their long time Alberta rival.

Should they prove to be unable to hold their own over the opening few weeks of the season, Dallas Eakins will likely have no choice but to turn to a 2A/2B scenario in which Perron and Yakupov will be centred by Arcobello and the duo of Pouliot and Teddy Purcell flanking either the former Prince Albert Raiders standout or Anton Lander.

Now would either of those be considered a legit second line? In my mind, none of the aforementioned combinations can accomplish that in this sort of setting but again, in a perfect world, having Leon Draisaitl, David Perron and Benoit Pouliot take a step forward would be a step in the right direction. If they can accomplish that, it should give the Edmonton Oilers a fighting chance to hold their own in the bottom half of the Western Conference standings or at least that is what the organization is banking on.