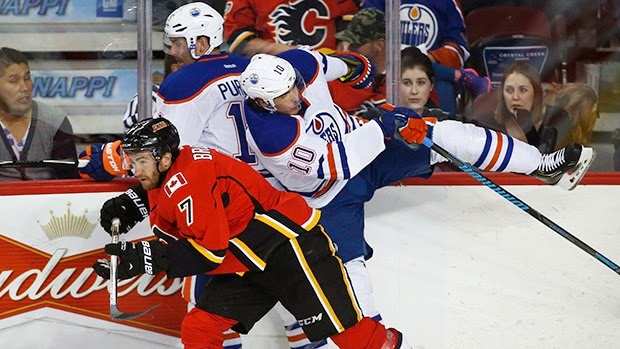 It may just be an exhibition game but come Wednesday night Nail Yakupov will be given an opportunity to show what he can accomplish playing alongside two of the Edmonton Oilers top forwards.

After a less than stellar performance in his pre-season debut against the Calgary Flames at the Scotiabank Saddledome on a line with Teddy Purcell and Mark Arcobello, the former first overall pick will find himself on the No. 1 unit with Jordan Eberle and Ryan Nugent-Hopkins tomorrow evening in Winnipeg.

While many were hoping the Russian sharp-shooter would be given a shot at earning a spot inside the Oilers a top six forwards to start the 2014-15 NHL campaign, the off-season additions of Benoit Pouliot and Purcell make that far less likely. In order for him to have any real chance of earning such a spot, he will need to make the most out of the chances he is given during pre-season and tomorrow night would be a great starting point.

Coming off what was just a dreadful sophomore campaign Yakupov would love to be given a shot to prove that last year was nothing more than a minor bump in the road but unfortunately for him, the days of this organization simply handing their young forwards key offensive roles are a thing of the past. If he wants that chance, he is going have to prove to Dallas Eakins that he deserves it.

With his overall game being nowhere near a finished product and other players with similar flaws already ahead of him in the pecking order, the twenty year old is going to have to outscore the likes of Pouliot and/or Purcell…and by fairly wide margin…in order to get any sort of extended look. Going out and showing he cannot only produce points but also play a responsible game on a line with Eberle and Nugent-Hopkins would surely send a strong message to those who fill out the line combinations on a nightly basis.

The vast majority of forwards who dressed in Calgary on Sunday were not very good but Yakupov was one of the better ones and created something almost every time he hit the ice. From the coaches standpoint, the kid is going to have to prove he is capable of being a far better all-around player than he showed during the 2013-14 season and that will be on the player. He will be given the odd chance to show what he can do with the likes of Eberle, Hall and/or the Nuge during the Oilers exhibition schedule and it will be up to him to show he is ready for prime time.

Here is a look at the rest of the starting lineup Edmonton will be dressing against the Jets on Wednesday evening: