Another Loss, Another Perron Trade Rumour 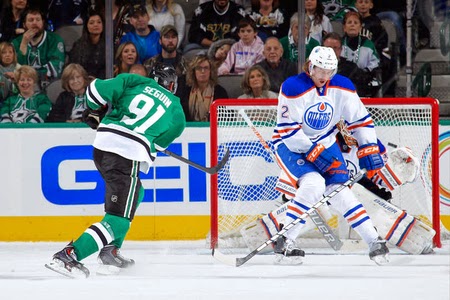 Last night’s 3-2 loss to the Dallas Stars leaves the Edmonton Oilers with a mind-blowing 0-10-1 mark against Western Conference opponents and we are now twenty-two games into their 2014-15 schedule. This group has now lost seven straight and despite coming out with one of their better performances in some time, things appear to be getting worse for Dallas Eakins’ crew.

While the losses continue to pile up, the rumour mill is just starting to heat up with much of the focus surrounding forward David Perron. After being mentioned as a potential centre piece in a number of possible trade options since Saturday’s implosion versus the Hawks, it looks as though Edmonton is seriously considering moving the former St. Louis Blues first rounder.

According to Aaron Portzline of the Columbus Dispatch and TSN’s Aaron Ward, general manager Craig MacTavish has set his sights on Columbus Blue Jackets centre Artem Anisimov to help fill his club’s gaping hole down the middle of the ice. Now whether any potential deal between Scott Howson’s former employers and the Oilers would involve any other names is unclear at this point but it looks as though the twenty-six year old native of Sherbooke, Quebec is on his last legs in Orange and Blue.

There is no question Edmonton would love to add a player with Anisimov’s size and skill-set to a lineup that currently features Ryan Nugent-Hopkins, Boyd Gordon, Mark Arcobello and Leon Draisaitl as its top four centres. However, inserting the former second round pick of the New York Rangers into a top six role will likely not have the desired effect MacT and company are hoping for.

Dressing up bottom six forwards as top six guys is something this organization has specialized in for some time now and it is one of the main reasons why they find themselves in the mess they are currently in. While first or second line pivots do not grow on trees, not sure how asking a one-time forty point player to suddenly morph into a second line centre is supposed to help the Oilers turn the corner.

From the standpoint of being able to compete against the big centres out west on nightly basis goes, the towering Russian would certainly be an upgrade on both Arcobello and Draisaitl but we are essentially talking about nothing more than a band-aid solution. While he would likely help soften some of the minutes that are currently being forced onto Nugent-Hopkins and Gordon, expecting much in the way of offence from the twenty-six year old would be a major mistake.

Meaning the likes of Nail Yakupov, who has continued to struggle to rediscover his scoring touch after suffering through what truly was a disastrous sophomore campaign, can continue to expect little to no support over the immediate future. Add to that the removal of Perron from the lineup, who led the team in goals in 2013-14, and the very underwhelming yet predictable performance from Teddy Purcell and you have a team that will be forced to count on the trio of Jordan Eberle, Taylor Hall and Nugent-Hopkins to create almost all of its offensive production.

All this coming on the heels of a game in which the Oilers were held to under three goals for the twelfth time in twenty-two games, despite facing one of the league’s worst defensive teams. While they did fire thirty-seven pucks towards Stars starter Kari Lehtonen, only Gordon and Hall managed to get pucks in behind the big Finnish puck stopper. As of this moment, Edmonton have gone 0-for-12 in games they have scored two or fewer goals.

To make matters worse, Eakins had his own goaltender cough up their “usual” awful goal a night, as Stars rookie defenceman John Klingberg beat Viktor Fasth from well outside the blueline to give Dallas the early lead and send the visitors reeling. To his credit, Fasth rebounded nicely and was fairly solid the rest of the way, making a number of clutch stops to keep his team in it, but in the end his early blunder combined with a two goal effort off the stick of Tyler Seguin, one coming courtesy of a terrible line change by Justin Schultz and the other on brutal giveaway from Jeff Petry and Andrew Ference, proved to be too much for the Oilers to overcome.

With back-to-back dates against the Nashville Predators and St. Louis Blues on their immediate horizon, it looks to be a forgone conclusion that Craig MacTavish will be pulling the trigger on some sort trade in the not too distant future and for his sake, he better hope this one does not blow up in his face.
Posted by Oil Drop at 8:51:00 pm