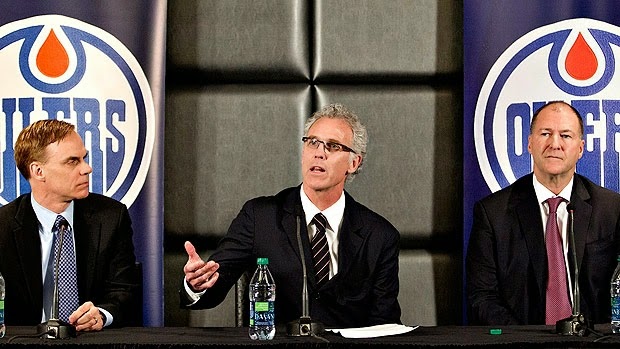 With their fans still reeling from watching their beloved Edmonton Oilers get destroyed on national television by the Chicago Blackhawks, expecting someone within the organization to come out and address what appears to be yet another wasted season in the Alberta capital did not seem to be asking too much.


While many would have loved nothing more than to have had Craig MacTavish come out and announce the firing of Dallas Eakins or some sort of massive trade, neither was ever going to happen on Monday morning. Panicking in these sorts of situations is never the way to go but for them to take the route they ultimately chose was downright embarrassing.

Owners of the worst record in the Western Conference and in the midst of a five game losing streak, this organization had the audacity to not only not address the situation but instead part ways with goaltending coach Frederic Chabot prior to embarking on a three game road trip. While many have been calling for Chabot’s dismissal for some time now, removing what is essentially the least relevant person on a coaching staff that has led this group to a miserable 6-13-2 mark is nothing more than a smoke screen to help quiet the masses and by this management team time.

If anyone honestly believes this team’s goaltending coach is the reason why their netminding has been god awful during Eakins time behind the bench, guess what…you are barking up the wrong tree. The fact that Devan Dubnyk, at the age of twenty-seven, was terrible after being handed the opportunity of a lifetime to start the 2013-14 season, isn’t on Chabot. Same goes for Ben Scrivens who at the age of   twenty-eight, has arguably been even worse after basically being placed in the exact same scenario.

At the age of thirty-two, Viktor Fasth hasn’t been given near the opportunity as the other two but the Swedish puck-stopper hasn’t been anywhere near good enough when he has seen time in between the pipes. In all honesty people, what on earth do you think a goaltending coach does? It is not as though any of them, and that includes two of the most highly-regarded guys out there in Sean Burke and Bill Ranford, are magic men when it comes to goalies.

We are not talking about furthering the development of a young netminder like a Michael Hutchinson in Winnipeg or even a prospect like Andrei Vasilevskiy in Tampa Bay, that one is especially for you NateInEdmonton (@NateInVegas). No we are talking about guys who established long ago what and who they are as goaltenders…solid National Hockey League backups.

A goalie coach can certainly help with suggesting that a player possibly look at making the odd tweak here and there but outside of that, when it comes to the big club, they are essentially in place to give goaltenders an outlet to bounce things off of. Most head coaches tend to steer clear of their netminders and there is a reason for it…they next to nothing about the position and hence the need for a goalie coach.

As much as people like to jump all over Chabot, it was not that long ago that everyone was raving at how much Dubnyk had improved after the forty-six year old coach arrived in Edmonton back in 2009…when the former first round pick was still only twenty-three. You can’t have it both ways people. In no way shape or form am I suggesting Chabot should have kept his job but can someone please tell me as to why the change did not take place during this past off-season?  Did these twenty games really change anything?

If anything, it now looks as though the reason he was not relived of his duties prior to the start of the 2014-15 campaign, was to use him as the fall guy if things did not go according to plan for MacT and company. For this organization to come out and can Chabot instead of having their general manager step up to a podium and address this gong show is a massive strike against this management group. At what point do you stop trying to save face and just come out and simply admit what the plan for the 2014-15 season was.

Despite what anyone will tell you, after watching this thing come completely off the rails during year number one of the MacTavish – Eakins Regime, this season was never being viewed as anything other than a throw away season by those in the front office. With a potential generational talent like Connor McDavid, highly touted Boston University forward Jack Eichel and a host of other great prospects available as the upcoming Entry Draft, this was nothing more than a “soft” tank job.

Some will surely point to signings and trades that saw the Oilers bring in the likes of Mark Fayne, Nikita Nikitin, Teddy Purcell, Benoit Pouliot and try to argue the point but let’s be serious. How on earth anyone expected a team with no starting goalie, just two NHL centres and a defence core that is still absent anything resembling a legitimate top three blueliner to compete out west is something I have still been unable to get my head around.

It was painfully obvious during the off-season and yet the masses ignored it and held out hope as Oilers fans always do. At the very least, management was banking on this group not being as inept at winning hockey games to start the year as the group they had assembled a year ago but unfortunately for them, they guessed wrong and they now have this mess on their hands and have absolutely no idea of how to deal with it.

So instead of facing it head on, Craig MacTavish and his band of merry men decided to hide behind their sacrificial lamb in the form of Frederic Chabot and handed their fans an offering to buy themselves a little more time. Not sure about all of you but for me, this is new low point for the Edmonton Oilers organization and the time has come for the ones running this show to take a long hard look in the mirror and actually try to fix what many used to consider one of the storied franchises in the history of the game.
Posted by Oil Drop at 6:57:00 pm