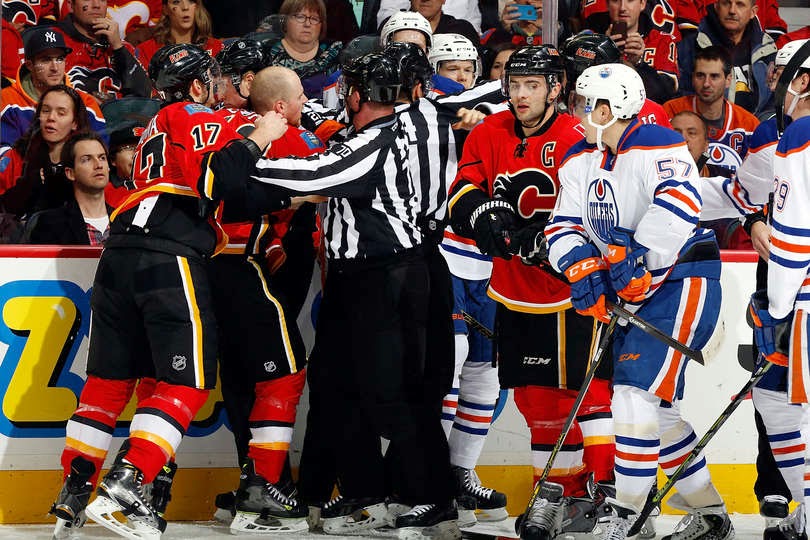 It may not have been the fashion in which the Edmonton Oilers were hoping to end 2014 but in a sense, it was the perfect finish to what has truly been a year to forget for all of Oilers Nation.

While Todd Nelson’s side were able to eke out a 3-2 shooout win against the Los Angeles Kings, despite being completely dominated over the final twenty minutes against Darryl Sutter’s crew, they were unable to close out the deal on back-to-back nights.

With that said, at no point did the Oilers resemble the team who was hanging on for dear life against the defending Stanley Cup champs.

In all honesty, they likely deserved a far better fate. Their overall game was much better but all anyone will remember about yesterday’s 4-3 overtime loss to the Calgary Flames will be the ill-timed line change from the defensive pairing of Andrew Ference and Justin Schultz which led directly to Josh Jooris’ OT winner.

Add to that the fact Ben Scrivens was unable to come up with that big stop when this group needed it most, something he had no trouble doing against his former teammates over at Rexall Place, and it is easy to forget about all the good we saw from the team wearing Oilers silks.

After being a complete non-factor in his debut performance, Matt Fraser was much more noticeable in game No. 2 and scored a power play goal to boot. Leon Draisaitl did not see much in the way of ice-time but the former Prince Albert Raiders standout made the most of his 9:17, registering a pair of assists and playing arguably one of his best games of the season.

By the sounds of it, the Oilers appear to be leaning towards doing the right thing, sending the nineteen year old back to the Western Hockey League and a potential Memorial Cup run with the Kelowna Rockets. While the Raiders and Rockets still need to finalize a deal for the big German pivot, the only thing that would keep that from happening would be if Edmonton were to decide to have him finish out the year in the Alberta capital.

Ryan Nugent-Hopkins continues to impress, logging a team-high of 25:36 in ice-time and playing in all situations. While Nugent-Hopkins did not hit the scoresheet against the Flames, it was the former first overall pick’s work on the penalty kill that was most impressive. With each passing game, we see the twenty-one year old continue to take steps forward in his overall game and considering he was just fed eight minutes of PK time, clearly his new head coach is a pretty big fan.

While Edmonton ultimately blew another multi-goal advantage, something which continues to happen with far too great a frequency, the Oilers actually managed to bounce back and regain the lead on Ference’s third period blast. Now that lead did not last long, two minutes and twenty-six seconds to be exact, the fact it even occurred is certainly a step in the right direction.

No matter how you look at it, the Edmonton Oilers needed 2014 to come to an end and now that it is officially in the books, hopefully this organization can turn the page and start to take legitimate steps towards fixing this mess.
Posted by Oil Drop at 1:38:00 pm