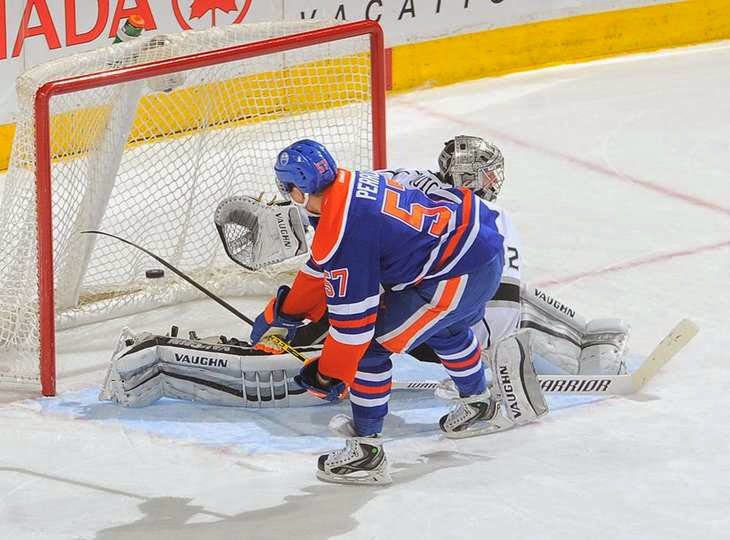 Despite having won just once in their last twenty-one games and in the midst of a nightmare of a season, it was always a matter of when and not if the Edmonton Oilers would win another hockey game. While they may have tried their very best to blow yet another multi-goal lead on home ice, at least for one night, the team wearing Orange and Blue found a way to get the job done over at Rexall Place.

On the strength of a thirty-seven save performance from netminder Ben Scrivens and a shootout winner off thestick of David Perron, the Oilers managed to put an end to their most recent losing skid with a thrilling 3-2 victory over the Los Angeles Kings.

On a night in which Darryl Sutter’s squad showed very little over the opening forty minutes of play, Edmonton jumped out to a 2-0 lead courtesy Matt Hendricks and Ryan Nugent-Hopkins.

While newly acquired Derek Roy made one heck of a play in setting up Hendricks’ first period ice-breaker, it was Taylor Hall and Nugent-Hopkins’ combined efforts to finish off what was one heck of a give and go that put the Oilers in the driver’s seat.

Considering the defending Stanley Cup champs were coming off not only a 2-1 loss to the Calgary Flames but also an unexpected travel delay before touching down in the Alberta capital, all signs were pointing towards Todd Nelson finally picking up his first win behind a National Hockey League bench.

However to their credit, the Kings refused to go quietly. From start to finish, it was all LA over the final twenty minutes and despite being beaten by Drew Doughty and Jake Muzzin to surrender the lead, were it not for some timely stops from Scrivens, Edmonton would have likely not even made it into the extra session…let alone the shootout.

After watching their goaltender stone Tyler Toffoli with a huge pad save early in OT, the players on the Oilers bench must have thought it would finally be their night. However, one cannot help but wonder if that belief was still intact following Jonathan Quick’s absolutely brilliant glove stop off Jordan Eberle during the second round of the shootout.

In the end, Perron would play the role of hero and send the Oilers faithful home with a smile on their collective faces for one of the very few times this season. In the grand scheme of things, it was a much needed two points for a group that was dying for something to go their way but one that ultimately means very little.

With a rematch against the Flames set for New Year’s Eve, perhaps Edmonton could close out the calendar year on a two game win streak and give their long suffering fan base something to celebrate…as small or inconsequential as it might be.
Posted by Oil Drop at 1:36:00 pm