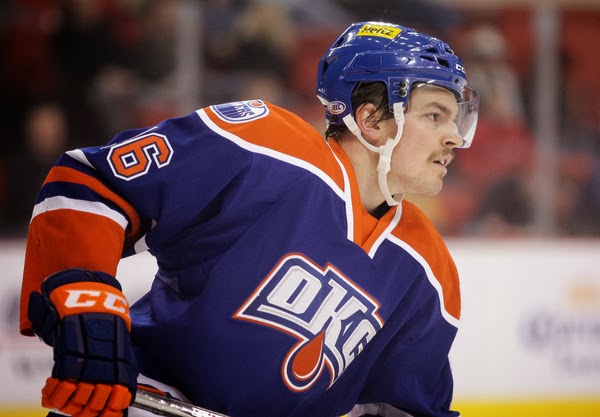 Regardless of what Craig MacTavish decides to do at this year’s NHL Trade Deadline, the Edmonton Oilers GM is going to have to decide what type of player he wants to employ as his fourth line centre come 2014-15.

As of this moment, the organization looks to have three options at their disposal. They could bring back the diminutive and somewhat offensively productive Mark Arcobello to be used as a possible swing-man in case of injury and delight a good number of Oilers fans along the way.

Option two would be handing over the reins to one Anton Lander and giving the Swede a legitimate shot at turning himself into a bottom six NHL forward. Both are palatable options and likely to be very cost effective measures but don’t be surprised to see MacT ultimately decide to go with door number three...looking outside the organization for more veteran help.

While one would be hard-pressed to question such a decision, the thought of giving up on Lander without taking a hard long look at what he could potentially become, in my mind, would be a mistake.

Can anyone honestly remember the last time the Oilers organization drafted and developed a player into a useful bottom six forward for their own NHL roster? If you go all the way back to the 2000 NHL Entry Draft, Edmonton has produced just three of these players…Kyle Brodziak, Andrew Cogliano and Jarret Stoll. Unfortunately all three of those men hold such a role with the Anaheim Ducks, Los Angeles Kings and Minnesota Wild…not the Orange and Blue.

From the moment he was selected in the second round of 2009, Lander was ear-marked as potential impact bottom six forward. While never a big point producer, scouts raved about his hockey smarts and leadership abilities, with many thinking the Oilers may have got themselves a steal of a deal in grabbing him at fortieth overall. It didn’t happen overnight but it looks as though the twenty-two year old might be ready to deliver on that promise.

After being rushed into the National Hockey League to start the 2011-12 campaign, Lander has dressed for just twenty-three games over the past two seasons, almost all of which came due to injuries on the big club. While he created next to nothing offensively during his most recent stretch in the big show, registering just one assist, Anton has looked far more comfortable in his NHL skin.

That said, it has been the improvement in his overall performance for the Oklahoma City Barons which is most impressive. After working on his trade over the past two plus seasons in the American Hockey League, the hard-working Swede has become Todd Nelson’s go-to-guy in 2013-14.

The Barons bench boss has used Lander in all situations and has reaped the rewards of the youngster’s finest season as a professional. As of this moment, he leads OKC in scoring with sixteen goals and thirty-eight points and is currently on an eight game point streak, (5G and 9A). In fact, he has collected points in fourteen of his past sixteen, (7G and 16A), since returning from his most recent pit stop in the Alberta capital.

Lander has done what has been asked of him at the AHL level to earn an opportunity but outside of a Trade Deadline call-up, there will be no guarantee moving forward. Much like Arcobello, who was among the Oilers best forwards over the first two months of the current campaign, it will come down to whether either player fits the mold of what Dallas Eakins and Craig MacTavish envision using on the third or fourth lines.

Neither one play the physical style the head coach and GM want to add to the Oilers unbalanced mix but both are responsible two-way forwards and are more than capable of contributing on the penalty kill. Those are two huge checkmarks in their favour but the former could come back to haunt both men.
Posted by Oil Drop at 10:07:00 am