MacT will be a busy man this summer 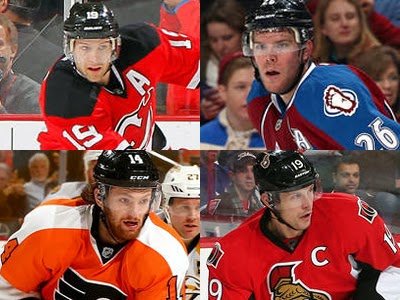 With the NHL Trade Deadline roughly two weeks away, you can bet Edmonton Oilers general manager Craig MacTavish is a busy man. While he has his fair share of pending unrestricted free agents to move at the deadline, the best of the bunch being Ales Hemsky, rumours surrounding the possible departure of Sam Gagner won’t go away.

One can argue if now is the right time to move Gagner but one thing this season has made abundantly clear, #89 isn’t the answer as this team’s second line centre. MacT is clearly a big fan of the individual and player but it looks as though the organization has finally come to the realization they need a different type of player in the two hole.

Should Gagner remain an Oiler past March 5th, he could still find himself in Orange and Blue come 2014-15…if his GM decides to move one of his many wingers in the off-season. That said, adding another top flight centreman is an absolute must and in my mind, there are four names that standout above the rest.

Outside of a two year stretch from 2008-2010, the talented two-way centre has never quite reached his full offensive potential playing for the New Jersey Devils. While he comes with a hefty ticket, $5.75 million a season until 2021, the twenty-eight year old is the exact type of centre the Oilers need.

The former first round pick is solid in his own end of the rink, good in the faceoff circle, used in all situations and he is more than capable of putting points on the board…which likely would come with far more frequency playing on a team like Edmonton. While he’s not a banger by any means, his 6’3” frame would be a welcomed addition to the Oilers smurf-like forward group.

He may be miscast as a first line scoring centre in New Jersey but with Ryan Nugent-Hopkins already in place, that won’t be an issue here. In all honesty, the combination of Zajac and RNH could be exactly what the doctor order and one would think the financially strapped Devils would be open to moving that contract.

Of all the potentially available unrestricted free agent centres, Stastny is by far and away the best. After struggling to regain the scoring touch he displayed during his first four years in the National Hockey League, the son of Quebec Nordiques legend Peter Stastny has returned to form in 2013-14.

He is on pace to easily register the sixth 20+ goal season of his career and looks to be headed for his best year since 2009-10. He’s not an overly big guy at 6’ and 205 pounds but he plays for bigger than those numbers might suggest and he is tough to knock off the puck. While he may not be as defensively responsible as Zajac, his ceiling is far greater from an offensive standpoint and he is light years ahead of Gagner on both fronts.

The former second round pick has always been a decent faceoff man and has actually taken more draws than any other Colorado Avalanche over the past few seasons. With Stastny and restricted free agent Ryan O’Reilly both needing new deals, the Avs will likely sign one but probably not both. With O’Reilly being an RFA and five years younger, logic dictates he would be the one they ink to an extension.

Going after the twenty-eight year old via free agency would cost the Oilers nothing but cash and term but you can bet there will be more than a few suitors for MacTavish to go up against. The Toronto Maple Leafs have always been rumoured to be interested the three time seventy point man and this would be there chance to take a run at him.

Of all the players on this list, the Philadelphia Flyers young centre would probably make the most long term sense but he would also have the least amount of impact in the here and now. Three years into his NHL career, Couturier has posted 70 points in 182 games, which are decent numbers for the role he is used in but not at the level the Oilers need to improve today.

That said, the kid is still just twenty-one and has already turned himself into one hell of a two-way player, with the ability to shutdown the opposition’s top players. At 6’3” he has the size Edmonton needs and you can bet on his 197 pound frame adding more than a little muscle over the next few years. As of this moment, the former eighth overall pick isn’t great on the draw but has already started showing signs of improvement and should only get better.

Prying a player like Sean Couturier out of Philly would prove to be rather costly and not give them much bang for their buck…for the moment. However, it would most certainly fill a couple of glaring weaknesses down road but I am not sold on MacTavish and rest of the Oilers brain trust being comfortable enough to eat another year or two to develop a second line centre at the NHL level. One thing we do know, the fan base has absolutely zero appetite for it.

The Ottawa Senators centre is an interesting case. At the age of thirty, the two-time ninety point man is still good enough to challenge Nugent-Hopkins for top line minutes and would be an absolute dream to add into the Oilers centre mix with RNH and Boyd Gordon. The 2001 second overall pick is a far better player in his own end of the rink than he was during the early part of his career and has turned himself into a pretty decent faceoff man.

While not an overly physical player, Spezza has always had the ability to use his size to his advantage and that continues to this day. He has never been a great skater but that hasn’t stopped him from posting 666 points in 665 games over what has been a pretty darn impressive eleven year NHL career.

The upcoming 2014-15 season will be the final one of his seven year/ $49 million deal he signed with the Sens prior to the 2008-09 campaign. In my mind, the chances of Ottawa wanting to re-sign him or Spezza hoping to remain in our nation’s capital are both highly unlikely, meaning the veteran centre could possibly be available in a deal.

Problem with that is what would the Oilers have to give up in such a deal? Obviously, they don’t even consider the move unless they can sign the player but he would definitely fit the bill of a veteran top six forward. In all honesty, he would be the complete opposite of Couturier…perfect short-term answer but not the best long term fit.
Posted by Oil Drop at 12:33:00 pm