Time to get busy 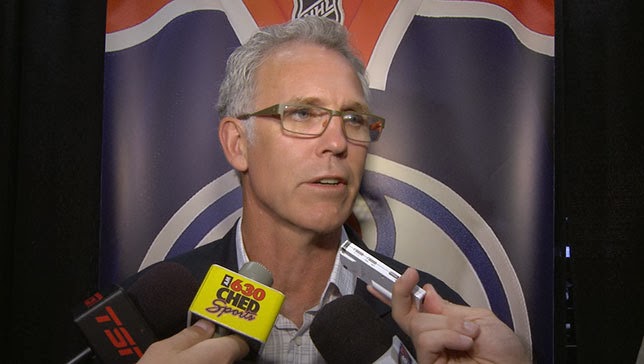 With the NHL Trade Deadline less than two weeks away, one can’t help but wonder how many players will ultimately find their way off the Edmonton Oilers roster. While the names of Sam Gagner, Ales Hemsky and Nick Schultz continue to make the rounds in rumour mills across the league, there are a number of other players who general manager Craig MacTavish could send packing prior to the March 5th deadline.


Players who will be on the hot seat include netminder Ilya Bryzgalov, defencemen Anton Belov, Mark Fraser and Corey Potter, as well as veteran forwards Ryan Jones and Ryan Smyth. Much like Schultz, none of the aforementioned players well fetch the Oilers much of a return but considering Gagner is the only non-UFA of the nine names mentioned, any return would be better than just watching these guys walk away for nothing in the off-season.

Now we may be talking about nothing more than a handful of late round picks but Edmonton could definitely benefit from restocking their cupboard for the upcoming 2014 NHL Draft. As of this moment, the Oilers have no second round selection (traded away with Magnus Paajarvi to the St. Louis Blues in the David Perron deal) or third round pick (used to acquire Ben Scrivens from the Los Angeles Kings).

In fact, they were actually down a fourth rounder as well, after sending it to the Toronto Maple Leafs for Mike Brown in 2013 but managed to recoup that pick from San Jose in late October, when the veteran tough guy was shipped off to the Sharks. That said, it still leaves Stu MacGregor and company with nothing to do over the opening hour or so of day two at the draft in Philadelphia.

Of the names mentioned above, the only ones likely to garner much more than a fourth round pick would be Gagner, Hemsky and possibly one or all three of Bryzgalov, Schultz and Smyth. In my mind, the chances of the Oilers second line centre moving before the summer is slim and as far as the talented Czech winger goes, the smart money would be on MacT trying to acquire a roster player in return.

However, should such a deal not be in the cards, one would think a late first round selection or a couple of second round picks could be what ultimately comes the other way for #83. While some may not be happy with that sort of return, that doesn’t change the reality of the situation.  Regardless as to the reason why, the fact Hemsky has collected just 44 points over his last 90 games and makes $5 million, kills his value.

If Craig MacTavish ends up with a couple of picks in his pocket for Ales Hemsky, plus a handful of mid to late round selections from the group of Belov, Bryzgalov, Fraser, Jones, Potter, Schultz and Smyth, he would not only keep his scouting staff busy on draft day but possibly equip himself with a few extra bullets leading up to January 27th and 28th. At the end of the day, that is when the restructuring of this roster will truly begin.
Posted by Oil Drop at 9:21:00 pm