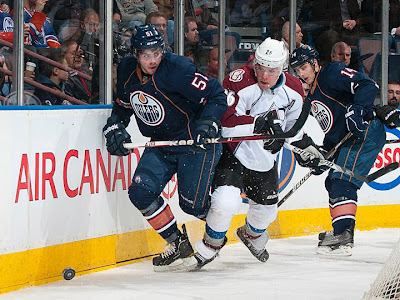 Heading into their first game after the All-Star break, the Edmonton Oilers had one goal in mind...showing the rest of the NHL that they are for real. After starting the season on fire and following it up with some absolutely dreadful hockey, this team clearly has something to prove over their final thirty-three regular season games. If last night's 3-2 victory over the Colorado Avalanche was any indication of what is to follow, these Oilers might just make a few teams cringe at the thought of facing them down the stretch. Rookie forward Philippe Cornet made his NHL debut and picked up his first point. While Devan Dubnyk stood tall in between the pipes, making thirty-one saves in picking up his eighth victory of the season.

Edmonton would open scoring, when leading scorer Jordan Eberle picked up his nineteenth of the season on a nifty wrap-around. Cornet won a battle along the boards to gain possession and hit Sam Gagner, who spotted the streaking Eberle. The All-Star winger took the feed and started heading behind in the Avalanche net, when he decided to do his best Doug Gilmour impression. Stopping on a dime, the talented sophomore reversed his course and promptly stuffed the puck inside the post, to give the Oilers an early lead. Not too shabby of a start for Cornet, who had his first point, less then five minutes into his first NHL game.
Before the period was out, Edmonton would double their lead courtesy of a four minute high-sticking penalty to Colorado's TJ Galiardi. Surprisingly, struggling centre Eric Belanger would be the one who doubled the Oilers lead, with only his second goal of the campaign. Belanger's quick slap shot found it's way through some heavy traffic and past Varlamov, to give the home side a 2-0 lead heading into the intermission.

The Avs wasted little time getting on the board in the second period, when Peter Mueller banged in his fourth of the year at the 1:16 mark. Mueller made a great play to lift Cory Potter's stick on a Colorado dump in and feed the puck to an open wing deep in the Oilers end. The puck was instantly reeled in by Chuck Kobasew, who quickly hit Mueller, in front of the Edmonton goal, for the easy tap in.

It would remain a one goal affair until Taylor Hall would restore the two goal cushion, six minutes into the third period. After gaining possession behind his own net, Hall made a quick pass to Shawn Horcoff who quickly  returned the favour, to start the breakout. Hall hit a streaking Ales Hemsky, just outside the Avs blueline and while his shot was stopped, the rebound found its way directly into the slot and sat on a tee for the hard charging sophomore. He made no mistake and buried it, for his seventeenth of the season

Just over four minutes later, Colorado would cut the lead back down to one when Gabriel Landeskog knocked in his eleventh of the year. Dubnyk mishandled an innocent looking shot from Ryan O'Reilly and was unable to control the rebound. After a mad scramble saw the Oilers netminder make two saves, the Avs rookie pounced on the loose puck and fired it past Devan, to make it a 3-2 game.

Dubnyk did the rest, stopping fourteen third period shots, which included a game saver off O'Reilly with just over two minutes to play. The victory gives Edmonton two wins in their last three contests and puts them in a positive mindset, heading into the final two games of their current three game home stand. It won't be easy for the orange and blue, as they will be facing two of the elite teams in the Western Conference. They host the Chicago Blackhawks on Thursday and square-off against the Detroit Red Wings on Saturday night.