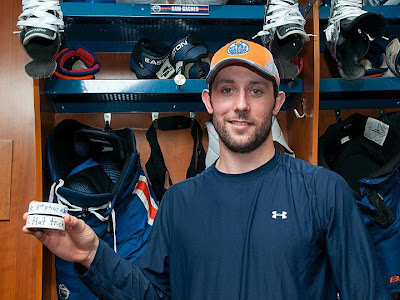 Over the last couple of seasons, Sam Gagner has become somewhat of a forgotten man in these parts. With the additions of Jordan Eberle, Taylor Hall and Ryan Nugent-Hopkins into the Oilers ranks, very little attention has been paid to the former sixth overall selection. After the show Sam put on last night at Rexall Place, I have a feeling that will no longer be the case..

Gagner put together a mind-boggling 4 goal, 4 assist performance, in leading the Edmonton Oilers to an 8-4 win over a beleaguered Chicago Blackhawks side. Edmonton has now beat Chicago three consecutive times and have out scored them by a 17-6 margin, in their two visits to Rexall Place. Sam's eight point night tied the team record that was previously shared by both Wayne Gretzky and Paul Coffey and also marked the first time an NHL player had scored eight points in  game since, Mario Lemieux last turned the trick on December 31, 1988.

Chicago was clearly the better team to start this one off, as the carried the play during much of the first period and jumped out to a 2-0 lead, just forty seconds into the second period. Not to worry, as the Sam Gagner Show was about to begin and there was little the Hawks could do, to slow down the talentedyoung centre.

First, he found Hall with a beautiful stretch pass to spring the speedy winger, who made no mistake, snapping his eighteenth of the season past Corey Crawford, despite having Brent Seabrook draped all over him. It was the third consecutive game Hall has scored and more importantly, was point number one for Gagner and made the score 2-1, at the 2:22 mark of the second period.

Just over five minutes later, Gagner would tie things up at two. After making a nifty move around a sliding Nick Leddy, Sam managed to out wait Crawford before  punching a wrap-around into a wide open Chicago goal for his sixth of the season. It was his first in twelve games and suddenly the Oilers and their fans had life.

At the 12:23 mark, Ryan Whitney would put the home side ahead, with his first goal since Boxing Day 2010, on a blast from the point, on the power play. Gagner had carried the puck into the Hawks zone but was forced to give up and fortunately, it landed right on Whitney's stick and he ripped a bullet off the post and past a stunned Crawford. It took the Oilers just over twelve minutes to comeback from a two goal deficit and for the former London Knights standout, to collect his first three points of the night.

Chicago managed to even the contest up when  Patrick Sharp fired his second-goal of the period and twenty-second of the season past Devan Dubnyk, with the Oilers on the power play. It seemed like momentum was suddenly back on the Blackhawks side with the third period too follow. So much for momentum, as Edmonton would strike early and often, in what was one of the most memorable periods of hockey the NHL has seen for some time.

Just under two minutes in, Gagner would pick up his second of the night to put the Oilers back in front 4-3. Sam corralled Whitney's blast off the end boards and quickly stuffed the puck into a yawning cage. Minutes later, Cam Barker's innocent looking point shot found it's way past Crawford and Edmonton was quickly up a pair. Gagner picked up a secondary assist for his fifth point and Crawford was yanked. Ray Emery was brought in to stop the bleeding but at this point, nothing was going to slow down the Gagner Train!

After Dave Bolland cut the lead back down to one, Gagner would restore the two goal lead with his third of the night and sixth point of the game...and we were all of six and a half minutes into the period. Hall chased down number 89's dump in deep into the Hawks zone and was absolutely stapled into the end boards but not before he found a the streaking Gagner, who zipped his hat-trick goal past Emery.

It would take him another seven minutes but the fifth year Oiler would make it four goals for the night, after converting a beautiful backdoor feed from Eberle into yet another, empty net. That was point number seven and he was one off the team record shared by Coffey and the Great One. There was still over five minutes to play but there was no way he would notch another point to tie Gretzky and Coffey in the Oilers record books.

Only two minutes later, Eberle would finish a beautiful three way passing play between the sophomore winger, Hall and Gagner, for number twenty on the campaign and suddenly Edmonton's legends had company in the record book. Rexall Place was in hysterics and Gagner almost sheepishly, left the ice. The crowd suddenly broke into a "We Want 10" chant and not so much in reference to the score but rather for the opportunity to tie the NHL record held by Darryl Sittler. Unfortunately, that was not to be as the scoring had finally ended and Sam Gagner had just had a game for the ages. To make it that much sweeter, he did it on a nationally televised game on TSN and in a nice touch, they gave him all three stars on the night. Simply put, an unforgettable night and yet another bright spot in what has been a disappointing season for Edmonton.

When asked after the game what he thought, Gagner replied with, "I think this is a joke". Obviously he was as stunned as the rest of us. "I didn't think I would ever be mentioned in the same breath as Gretzky or Coffey," said Gagner. "You never expect to do something like this".

Taylor Hall was asked about what he thought of his linemates performance and said "I feel like a bit of a pigeon tonight with four points". and while very funny, it is so true. Both Hall and Eberle had four points and were plus four on the night but they dwarf in comparison to the four goal, four assist and a plus six rating in just over seventeen minutes of ice time that their teammate just pulled off.

Much has been made of Gagner in recent months and if he still has a place in the Oilers re-build. Not many would or can question his talent but many felt his size could be an issue, when you consider none of Edmonton's front end players are overly big in stature. Having said that, after getting the short end of the stick for much of the early part of the season, Sam kept his mouth shut and did whatever was asked of him. No one works harder then this kid and for that reason alone, last night could not have happened to anyone more deserving. Take a bow young man because you have accomplished something that will forever be remembered as one of the greatest individual performances in this storied franchises great history.