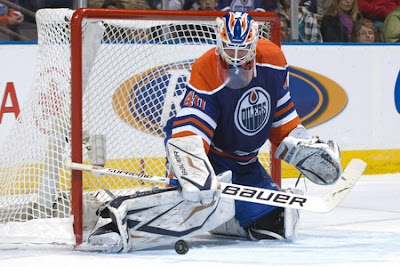 With the month of January now in the books, it's time to look back at the month that was and dish out my monthly report card. Each players rating will be based on their performance from opening night up to and including the teams last game on January 31st. Today the focus will be on the blueline and netminders, while tomorrow I will take a look at the forwards and coaching staff.

Devan Dubnyk - While Devan's play during the first month of the season wasn't as good as Nikolai Khabibiulin's, he was still pretty solid throughout the month of October. It was the following two in which he was, more often then not, simply dreadful. For the first time since the early in the season, Dubnyk has started to show signs of improvement. He was by far the better of the two netminder's  last month, going 4-2-1 with a 2.38 GAA and a .926 SV% while starting the final three games of the month. The ball is currently his and now it's up to him to seize the opportunity.
Needs To Work On: Even with his improved play, Dubnyk has still been allowing far too many weak goals but they are no longer at crucial times. If he works on eliminating the nightly soft one and stays positionally sound, Devan could have a very strong final third of the season.
Grade: B-

Nikolai Khabibulin - After having his worst month of the season in December, the Oilers were hoping Khabibulin would rebound with the start of another calender year. Unfortunately, they received an almost identical performance from their veteran netminder, as he continues to struggle with his consistency. His stats for the month were less then impressive, as he went 0-5-1 with a 3.31GAA and a .893 SV%...obviously, those numbers are not good enough. It has been a tough couple of months for the Russian keeper, who looked all world against the Blues, in one of his best games of the season but that was sandwiched in between two of his worst.
Needs To Work On: Honestly, I think part of what is happening with Nik, is simply law of averages. He was so good in front of a poor defensive team early on and was keeping them in games but that is no longer the case. At this point, he needs to eliminate the nightly bad goal against and continue being a strong mentor for Devan Dubnyk.
Grade: B

Cam Barker - As the month came to a close, word was Cam was ahead of schedule and should be ready to go any day. This team desperately needs him back in the lineup. Many weren't overly impressed with what he brought over the first month and a half but all I know, is this team went in the tank as soon as Barker got hurt.
Grade: N/A

Tom Gilbert - With Gilbert going down to injury during the first game of the month, his rating will remain the same. While he doesn't seem as close to returning to action as Barker, it sounds as though he will be ready to go in the not to distant future.
Needs To Work On: Along with Ladislav.Smid, Tom has been one of the Oilers few bright spots on the blueline.Edmonton will need him to continue playing at that same level upon his return and help lead them to a strong finish to their season.
Grade: A

Theo Peckham - With all the injuries on defence, Peckham has been asked to start playing major minutes and for the most part, he has done an alright job. While he continues to struggle with aspects of his game, he is simply in way over his head and that is no fault of his. The try is there and he has cut back drastically on the amount of blunders he was committing but is still nothing more then a depth defenceman.
Needs To Work On: Continue to keep the game simple but he must be much more consistent with the physical side of his game. If Theo isn't playing physical, his effectiveness is almost nullified.
Grade: C-

Jeff Petry - After an absolutely awful month of December, Jeff rebounded with arguably his best run of play in his young NHL career. When Tom Gilbert was knocked out of the lineup, Petry was handed a much larger role and the young man has taken full advantage of the opportunity.  While he still makes his fair share of mistakes, his overall game is night and day, compared to earlier in the season. The hesitation in his game seems to be a thing of the past and playing with Smid, has helped him immensely. On most nights, Petry has been this clubs ice time leader and unlike most of his teammates, he hasn't looked out of place playing those minutes.
Needs To Work On: He still needs to improve on his positional play and making better decisions without the puck but he has to remain aggressive. He needs to keep his confidence level high and continue doing what he has been doing. If Petry can accomplish that over the final thirty games, he will be one of the lone bright spots of what has been a forgettable season for Edmonton's blueline.
Grade:B

Alex Plante: After being knocked out of the lineup against Vancouver on December 26th, Plante was sidelined for sometime with post concussion symptoms. While he didn't play another game in Edmonton, he has recovered and is back playing regularly in Oklahoma City. He does seem to be taking strides in his overall game, even though many have questioned the big man's abilities and if he will ever be good enough to be an NHL regualr. Tough to say but he was selected as one of the starters in this year's AHL all-star game. Clearly, he must be doing something right.
Grade: N/A

Corey Potter - In my mind, no defenceman has been fighting it more, then Potter. Part of the problem is Cory was never as good as his start indicated and the other issue, is the role he is currently in. With all the injuries this team has endured, he is being asked to play a top four role with guys that are even less qualified then he is. Sure soiunds like a recipe for disaster and that perfectly describes Potter's play in recent weeks.
Needs To Work On: Corey tries to do far too much on ice and he is starting to turn into a blooper reel in his own end. Positionally he has been poor, while his decision making has become suspect in almost all situations. With the return of Ryan Whitney to the lineup and the pending arrivals of both Gilbert and Barker, Potter should be placed back into a role that he is best suited for. Less pressure and responsibility, should make for a much more effective Corey Potter.
Grade:C

Ladislav Smid - You won't hear a bad thing come out of my mouth about Ladislav. I have always liked his game but I did have questions about his hockey smarts and durability. That is no longer the case and in my opinion, Smid has solidified himself a spot on this team for years to come. Once Gilbert was knocked out of the lineup, I feared a big drop off in his game might occur but that hasn't been the case. He has been a great security blanket for Jeff Petry while continuing to play a solid all around game.
Needs To Improve On: Same as the previous month, he needs to stop trying to block nearly every attempt on goal and hence, stay on his feet. Smid has been running around a little more lately but I find much of that is due, to playing regularly with Petry.
Grade: A

Andy Sutton - With the revolving door Edmonton has had on their blueline this year, the veteran has been a godsend. When healthy or not suspended, Sutton has been much better then advertised and has emerged as one of the leaders on this team. He has had to deal with playing a far greater role then any one had anticipated and has had to deal with a lot of on ice babysitting, in playing with the likes of Colten Teubert.
Needs To Improve On: Sutton has been pretty darn good, playing in roles he frankly has no business being in. Having said that, the hulking D man needs to ensure he remains healthy and doesn't get suspended, as Edmonton may very well move him come Trade Deadline day.
Grade: B-

Colten Teubert - The twenty-one year old played nine games during the month and struggled mightily. He continued to have trouble with the speed of the game and the more he played, the more he appeared to struggle mentally. It is hard enough for youngsters to deal with playing at the NHL level but when a player is not ready upstairs to deal with the game, they will usually be eaten alive and that is exactly what started to happen to Teubert.
Needs To Improve On: Colten will hopefully remain in Oklahoma City the rest of the season and be given the chance to continue to work on his game. The Barons could possibly be headed for a lengthy playoff run and playing in those types of situations, should do Teubert a world of good. He needs to become a dominant D man at the AHL level and focus on making far better decisions, be it with or without the puck.
Grade: C-

Ryan Whitney - Edmonton's top blueliner finally got back into the lineup at the tail-end of the month and played his two best games of the season. Whitney is still not 100% but if the two games against San Jose and Vancouver are any indication, he is in a far better place currently, then he was in his previous seventeen games. He is obviously a calming influence, when healthy, and his ability to make an outlet pass and transition the puck up ice, can not be matched by anyone on the current roster. If the big guy can play the remainder of the season, I have no doubt that the Oilers will win some games they were finding ways to lose.
Needs To Improve On: Staying positive. It sucks that he has had to deal with all the uncertainty surrounding his ankle but it is what it is. Dwelling on it will due him no good. Ryan needs to curb the expectations for himself and just see how things go. If he feels better and starts to improve, great, but if he feels uncomfortable and isn't ready to compete to the best of his current ability, then he needs to shut things down. Regardless, positivity is the word of the day for one Ryan Whitney.