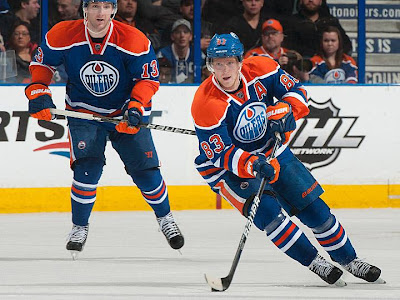 The move means four of Edmonton's top six forward spots have been claimed for the 2012-2013 season. The biggest question mark remaining, will be what the club decides to do with restricted free agent Sam Gagner. While the plan will be to re-sign the suddenly reborn Gagner, if the right deal presents itself for a quality blueliner, it may be something the organization would have to seriously consider.

If the signing of Hemsky wasn't good enough for fans in Oil Country, news that Nugent-Hopkins will return to the lineup tomorrow afternoon, should put them over the top. The talented rookie was given clearance to resume what has been a stellar rookie campaign, for last year's first overall selection. No word on where RNH is expected to play but the smart money would be on the eighteen year old centre finding himself in between Hall and Hesmky.