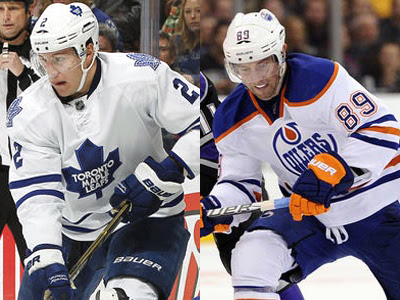 While Schenn and Gagner have had their ups and downs, both players still have huge potential moving forward. The two youngsters have had many similarities run throughout their careers. Both were top ten picks, Gagner was 6th overall in '07and Schenn was the 5th selection in '08, and many have questioned the strategy of both organizations in rushing them to the NHL and ultimately hindering them in their development. Though I can understand that line of thinking, I look at them as being twenty-two year old kids that are just coming into their own and I would argue the point that they have had their development "hindered" by playing in the NHL. In my mind, the player needs to go through growing pains at some point and these two have just gone through them sooner then most. If anything, the fishbowl mentality in both Edmonton and Toronto when it comes their team, has probably been the biggest hurdle for either player to overcome.

In Schenn you have a player that has all the makings of a shutdown defenceman that brings a physical aspect to the game, that not many blueliners possess. In my mind, the Leafs rearguard has an offensive upside that has yet to be tapped and he would fit in nicely with the Oilers young nucleus of Taylor Hall, Ryan Nugent-Hopkins and Jordan Eberle. Adding a player like Schenn to the Edmonton blueline would fill a huge hole and  help greatly in moving their re-build, when it comes to the backend.

Gagner has the potential of becoming a very good second line centre and would be a nice fit in Edmonton or Toronto. While Sam is a little under-sized he never quits and he is as feisty as almost any smallish skilled forward in the league. Gagner recent stretch has thrust him into the spotlight and people are finally taking notice. He has shown the ability to put up points on a regular basis, if he used in proper situations and given quality linemates to play with.

Again, it is not as though either side are in any rush to just give away their respective player but in order to acquire something of quality, you generally need to give up something of worth. While fans of both teams likely feel their player is "worth more", in this scenario, they would be mistaken. The Oilers strength is clearly in their forward ranks while the Maple Leafs have loads of quality young defencemen...seems like a match made in heaven.
Posted by Oil Drop at 5:39:00 am