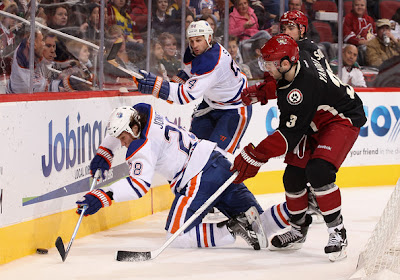 Both Ryan and the organization have stated they would be interested in getting a contract extension done for the soon to be thirty-six year old veteran. In my mind, if they decide to re-sign him to a deal, be it a one or two year contract, the player most likely to find himself on the way out of Edmonton, would be none other then Ryan Jones. While Jones is also a fan favourite and manages to get a lot out of his limited skill set, I can not see a situation that would allow the club to keep both players for the 2012-2013 campaign. So the question becomes: Which Ryan should they keep?

While I had given this some thought in recent weeks, it was after having a discussion via twitter, with Oilers blogger Staze's Oilers Rant, that I started to give this serious thought. We were going over line combinations for next season, when it hit us both like a ton of bricks. He posted the piece "Is Re-Signing Ryan Smyth The Right Move? on his blog, that examines the Oilers depth chart. The potential problems trying to keep Smyth around causes are simply not worth the hassle. Nothing against Smyth but it's time to turn the page.

With Smyth's days as a top six forward clearly over and his tendency to turn over pucks, take long shifts and not being overly strong in own end, nothing he does makes him a good fit as a bottom six winger. Where as Jones is nothing more then a third or fourth line guy and will be twenty-eight years old when next season begins. It comes down to a game of numbers and barring some sort of trade, the following players will be part of the Oilers bottom two lines:

That would leave three available spots and lets assume one goes to Jones or Smyth. That brings it down to two and you would have to believe one of those will go to Teemu Hartikainen. Which leaves one and in my opinion, that thirteenth forward spot should go to a guy like a Lennart Petrell. Not sure if it would be Petrell who would ultimately get a crack at it but it would be a similar player. Someone you can work in and out of the lineup and use as insurance for Hartkainen, in tough match-ups. This is going on the assumption that Magnus Paajarvi will play top six minutes but if that isn't the case, things will be even tighter at the bottom of the lineup.

Ryan Smyth has been a great Oiler and one of the most popular players in franchise history. When you consider the players that have played in this organization, the fact he is loved as much as he is, says a lot about the character of the man and what he has meant to this city. That being said, if this team wants to continue moving the re-build forward, the time has come to turn the page, once and for all, when it comes to # 94.
Posted by Oil Drop at 9:09:00 pm