HHOF miss the boat on Lindros, out to lunch on Sundin 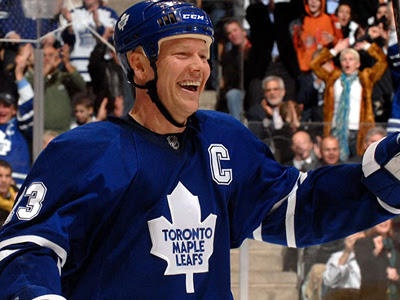 The Hockey Hall of Fame announced their 2012 induction class on Tuesday afternoon and there was one name that stuck out like a sore thumb. That being former Toronto Maple Leafs centre Mats Sundin. How he can get in on the first ballot, when former Philadelphia Flyers centre Eric Lindros remains on the outside looking in, is a mystery to me. To make matters worse, fellow first time nominee Brendan Shanahan somehow fell short of election, despite having better career totals than the former Leafs captain ...can you say Toronto basis? I sure can and when it's this obvious, it's not even funny.

The other three inductees selected for enshrinement were Colorado Avalanche star centre Joe Sakic, Vancouver Canucks sniper Pavel Bure and one of the best passers to ever play the game, Adam Oates. Nobody should have much of an issue with any of those players being elected but the only true first ballot guy of the bunch, was Sakic. He was an elite player for a very longtime and has the stats and championships to prove it. What does Sundin have?

He put together a very nice career and likely deserves to be in the Hall of Fame someday but not on the first crack. It's almost embarrassing to even suggest and the worst part about it, is that Mats will now have to hear about it. Why they couldn't wait a couple of years to have him go in is baffling. That is until you remember how long he wore the blue Maple Leaf on his chest. They sure had no problem making the likes of Glenn Anderson and Dino Ciccarelli wait an eternity to get it.

The same Glenn Anderson who was just under a point per game player for his career but won six Stanley Cups and is one the most prolific playoff performers in NHL history. Ciccarelli was like Sundin, in that he never won any individual awards or never had any team success but did end up with over 600 goals for his career. They had to wait but not good ol' Mats, he just sails right in.

We have a  player like Eric Lindros, still not in the Hall of Fame, despite being the most dominant player in the league during the 1990's. He is also the proud owner of a Hart Trophy as the league MVP. Obviously, his career was cut short by injury but that is the case with Cam Neely and now Bure. You could argue that Eric was better than both of those guys but that is neither here nor there. Point is, he is still waiting.

Shanahan is the most perplexing one of all, as this was also his first year on the ballot and somehow Sundin went in and he didn't. The former Detroit Red Wing currently sits thirteenth all time with 656 goals, has more points than Sundin and has three Stanley Cup Championships. Also, consider that the Wings didn't win their Cups until after Shanny arrived and it even further demonstrates his value to the club's success.

A confusing one to say the least but maybe the voting committee can complicate things even further next year and vote Curtis Joseph in it. After all, what kind of Hockey Hall of Fame would it be, if it wasn't filled with former Maple Leafs...regardless of whether they belong or not.
Posted by Oil Drop at 1:40:00 am