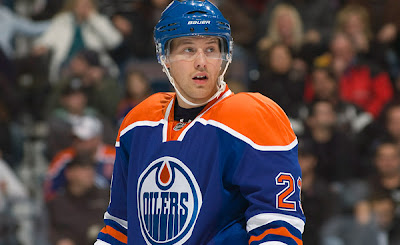 You can slot me into the group of people that were hoping Linus Omark would have been given a legit shot of showing what he could do playing alongside the Edmonton Oilers best players. Unfortunately for Omark, that opportunity no longer exists. With that being the case, the organization should do the right thing and allow the diminutive winger to move on. With today being the deadline for clubs to qualify their restricted free agents, the Oilers have no real reason for keeping the talented Swede around and hence, have no need to make him an offer.

Omark isn't exactly everyone's cup of tea but he has boatloads of talent. Thing is, the Oilers have a bunch of highly skilled young forwards that have made the winger nothing more than an afterthought. Some will argue that Edmonton should not just "give away" an asset like Linus but what would they really be giving away?

There is little doubt that Steve Tambellini has attempted to send the shootout specialist on his way but there is obviously no takers. Edmonton took him with their fourth pick back in 2007 but he hasn't been able to wiggle into the mix with the big club. While he is still fairly young at twenty-five years old, Omark is no kid and wants no part of playing in the AHL.

He has made it abundantly clear that he wants to play in the NHL so why not give him that chance? At the end of the day, does it really matter if the Oilers acquire a B level prospect or a late pick in return? At some point, don't you have to give a guy a shot at earning his dream? If he signs elsewhere and doesn't make it, so be it. At that point, it becomes the player's call.

Does he want to stay in North America and be a bubble NHL guy or does he go to the KHL or back to the Swedish Elite League and earn a nice living playing the game he loves? Who knows but ultimately, the Oilers should set him free and allow him to go out and try and earn a spot on a National Hockey League roster. Which is something Linus Omark has no chance of doing in Edmonton.
Posted by Oil Drop at 11:31:00 am