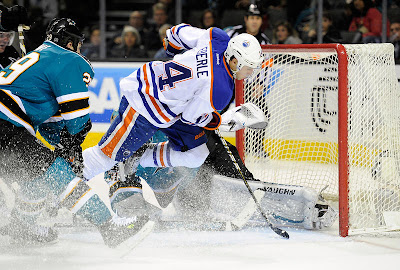 While he did appear to have the magic touch throughout much of his seventy-eight game schedule, little that Eberle accomplished was much of a surprise. In fact, his overall points per game breakdown dictates that he may actually headed for an even better season in 2012-2013, rather than see him take the step back that some have suggested.

In my opinion, the two factors that played the biggest part in his 76 point campaign: consistency and Ryan Nugent-Hopkins. While the likelihood of the Nuge struggling during his sophomore year looks to be nothing more than a pipe dream, it would seem just as unlikely for the Oilers most productive player, to not continue on his scoring ways..

It is true, that Jordan's shooting percentage of 18.9% was a tad on the high side but when you consider he only took 180 shots on goal and has arguably the best set of hands in league, to go with one of its deadliest releases...his shooting percentage isn't an area that should ever be much of a concern. While his rookie total of 11.4% was substantially lower, he did pass up on many quality chances to fire the puck on goal during year one and was still adjusting to life at the NHL level. That will no longer be the case, as he is not the new kid on the block...he is now this team's trigger-man.

The other thing to keep in mind, is there was no Sam Gagner type night that one could point to and say, that would never happen again. Ironically, his two 4 point nights came against the Chicago Blackhawks, one being Gagner's 8 point outburst, but a four point game is something many of the best players in the league would accomplish once or twice a year.

Outside of that, Eberle collected three points on three separate occasions and picked up at least two in sixteen other contests. Meaning he registered a single point on twenty-seven other nights. Do any of those numbers sound that outlandish? What they do sound like, are totals from a guy who consistently produces offence.

Few seem to remember that Jordan was snake bitten to start the season and didn't get goal number one until game number eight. He also had four more mini slumps, where he went five games(twice) and another four(also twice)without hitting the back of the net. Meaning his 34 goals came in his remaining 53 games. Again, not exactly numbers of a guy who got "lucky" but rather one who is freakishly consistent...even at the tender age of twenty-two years old.

Heading into last season, my pre-season predictions had Jordan Eberle down for 30 goals and 55 points and Ryan Nugent-Hopkins slotted for a 13/40/53 rookie campaign. Hence, his thirty-four goals were no real shock and while RNH's totals were pretty much what I expected, in no way shape or form, did I envision the kid to be as good as he was out of the gate. The fact the two were a perfect fit with one another, was not terribly shocking, but just how good they were was rather astonishing.

With that being the case, it makes a player with Eberle's skill set and consistency become, barring injuries, almost slump proof. The two have formed a special bond and one that should make them a handful for year's to come. While expectations should always be kept somewhat in check, expecting a repeat performance from #14 in the coming season wouldn't really be asking for too much and you can bet he is expecting even more out of himself...as all great players do.
Posted by Oil Drop at 6:08:00 am