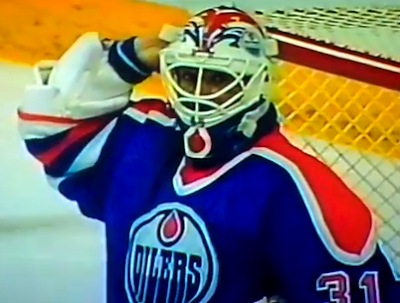 After being unceremoniously bounced in the second round of the 1986 playoffs, courtesy of Calgary's stifling defensive system, which was played to perfection under head coach Bob Johnson, and an untimely miscue from than rookie defenceman Steve Smith, Edmonton had revenge on their minds. The dream of winning three consecutive Stanley Cups died an instant and shocking death, something both fans and players never forgot. At some point, there would be a chance at payback.

While Edmonton rebounded to bring home their third Cup in four years in 1987, they never had a chance at redemption against the Flames, who were upset in the first round by the Winnipeg Jets. That opportunity would come in 1988, with most experts picking the Oilers to ultimately fall to their southern rivals. Not overly shocking, when you consider Calgary were the top team in the league at the end of the regular season. Little did they know what Wayne Gretzky and company had in store for their provincial rivals.
Both sides started off strong in Game One, as Mark Messier and Brad McCrimmon exchanged first period power play markers but the Flames were the better side over the opening forty minutes. Unfortunately for them, netminder Grant Fuhr was at his very best, denying chance after to chance and keeping the score tied at 1-1, through two periods.

The Oilers puckstopper made a couple of outstanding glove grabs off Al MacInnis and Hakan Loob late in the second period but topped both of those with an absolutely ridiculous pad stop on a Colin Patterson deflection, before the middle stanza was up. The ice was starting to tilt badly in the Flames favour, thanks to a major penalty assessed to Edmonton's Normand Lacombe, late in period two.

After Fuhr turned aside a couple of more grade A chances early in period three, his teammates were not about to let an all world performance by their star goaltender go to waste. The Oilers finally awoke from their slumber and started to show signs of life. Gretzky nearly put the visitors back in front, on a partial breakaway, but his initial blast caught a piece of Mike Vernon's glove and than the post, before being cleared to safety. Apparently no one could buy a break...or so it seemed.

Seconds after watching #99's shot hit the bar and stay out, linemates Jari Kurri and Esa Tikkanen combined to knock down defenceman Rob Ramage's clearing attempt on the Flames side of centre. One quick touch pass later, saw Kurri barreling in on Vernon down the right side and the Finnish sniper made no mistake, wiring a bullet just under the bar and giving the Oilers the all important 2-1 lead...with just under seven minutes to go in regulation.

Less than three minutes later, Gretzky would be sent in all alone on a lovely feed from Kurri. This time the Great One made it count, using his classic forehand/backhand move to freeze Vernon, before easily depositing the puck over the helpless Flames goaltender. In a blink of an eye, a game that Calgary should have had comfortably in hand, was taken from right under their noses.

Without question, it was a game that Fuhr out-and-out stole for the Oilers but at the end of the day, Edmonton's top players produced when it mattered. Even though it wasn't their finest performance, hard to argue with goals from Messier, Kurri and Gretzky, and a three point night from Esa Tikkanen. Not to mention, a first start performance out of their starting goaltender.

In all honesty, Game One could not have gone any better for the Oilers. They did not play anywhere near their "A" game but still found a way to get the job done. Heading into Game Two, all the momentum was now in Edmonton's favour, as both teams prepared for round two, in forty-eight hours time.