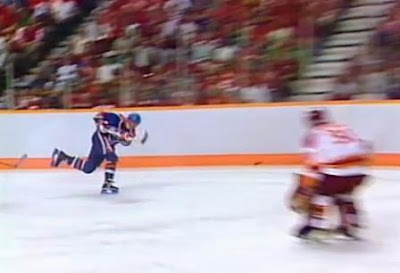 Edmonton came out like gang busters but were unable to find a way to get one past Mike Vernon. Not exactly the start the Flames were hoping for but they would soon get the break they were looking for courtesy of a rare blunder from the Oilers netminder.

Fuhr misjudged a harmless looking slap shot from Lanny McDonald, that some how found its way through the Game One standout to give Calgary the early lead. Just like that, the Flames and their fans had come to life and four minutes later, they would make it a two goal cushion.

Edmonton continued on their penalty taking ways of Game One and this time it would prove costly. Defenceman Al MacInnis ripped one of his trademark blasts past Fuhr, with the Oilers two man short, and suddenly the Flames were up a pair just past the midway point of the opening stanza. It appeared as though it was Calgary's night but to Edmonton's credit, they wasted little time in answering back.

For the second straight game, Mark Messier would open the scoring on the power play for the Oilers, as his pass/bankshot deflected off defenceman Paul Reinhart's skate and past a helpless Vernon, to make it a one goal margin.

Calgary would restore their two goal cushion early in the middle frame, as Joel Otto deflected home a Rob Ramage point shot up and over Fuhr, with the Oilers shorthanded yet again. However, Edmonton would battle get that one back, as Charlie Huddy's seeing-eye point shot found it's way past the stunned Flames goaltender. That trimmed the lead back down to one and set the stage for #99 to complete the come back.

With Edmonton back on the power play and controlling the flow of play in the Calgary zone, Gretzky was inexcusably left all alone on the side boards with the puck on his stick and nothing but space between him and the Calgary goal. He gladly took the open space, faked a shot and ripped a bullet past Vernon from the face-off dot.

The Flames would take their third lead of the night early in the third, when Tim Hunter, of all people, slid home a lovely pass from Hakan Loob into an empty net on an odd man rush. It was a lead that Calgary was looking like they would nurse home to even the series heading back to Edmonton...that is until Jari Kurri struck again, to even things up late in the third.

The talented Finn picked up a nifty little touch pass at centre ice from Mike Krushelnyski and proceeded to jump between Reinhart and Loob at the Flames blueline, before beating Vernon with a perfect shot to stick side at the 16:01 mark..An absolutely brilliant individual effort sent the Oilers bench into a frenzy and left the Flames and their fans in a state of shock.

This one would go to overtime, adding not only another memorable chapter to the Battle of Alberta but also another one of those special moments, that had become the norm in the career of the Great One. After playing nearly thirty minutes during regulation and just over seven of the final ten minutes in the third period, one would think Gretzky would have had little left in the tank but that clearly wasn't the case.

Six minutes into the extra session, Messier was assessed a tripping penalty for dumping Joey Mullen in the Flames zone, after nearly ending it seconds earlier on an individual rush. The penalty gave Calgary a glorious opportunity to win it, on the man advantage. Edmonton had been solely rotating the Gretzky and Messier lines throughout OT but head coach Glen Sather still sent #99 over the boards on the penalty kill. How he played all those minutes is still a mystery to me.

With the Messier penalty set to expire, Calgary's Gary Suter dumped the puck into the Edmonton end that defenceman Steve Smith totally misplayed but deflected directly to the stick of Kurri, who spotted Gretzky behind the Flames defence, just outside the Oilers blueline. From there, the greatest player who has ever played the game of hockey did the rest.

After killing almost 95% of the Messier minor and seemingly never leaving the ice, Gretzky somehow manged to not only pull away from the oncoming Calgary defenders but unleashed the perfect shot, over the shoulder of Mike Vernon and into the back of the net. As great as Gretzky's career was, in my mind, that one goal said it all.

To this day, whenever I watch the replay of that goal, all I do is wait to hear the "ping" that is followed by dead silence in the Saddledome...outside of the Oilers players going nuts and Glen Sather giving the Flames fans a special salute. Simply put, it was sports theatre at it's finest.