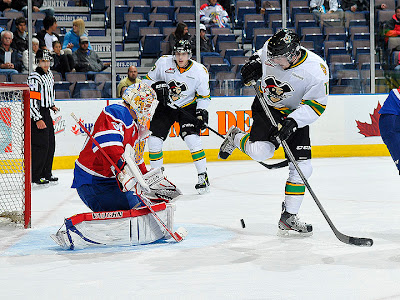 After looking like world beaters in their opening three games of the season, the Edmonton Oil Kings have fallen onto hard times. Thursday night's 4-1 loss, at the hands of the Prince Albert Raiders, leaves the Oil Kings with a 3-2 record on the season. Travis Ewanyk scored his first of season in the losing effort, which leaves Edmonton in third place of the WHL's Central Division.

The Oil Kings came out of the chute like gangbusters, hoping to avenge their first loss of the season last Friday, to the Calgary Hitmen. Unfortunately, they were unlucky to find that early icebreaker, thanks in large part to Raiders netminder Luke Siemens. However, the visitors made the most of their chances, jumping into an early lead, just before the midway point of the opening frame.

Centre Logan McVeigh notched his third of the young season, after scoring all of five during the 2011-2012 campaign, beating backup Tristan Jarry with a quick snapshot, to make it 1-0 after twenty. Edmonton continued to carry the play in period two, outshooting Prince Albert 25-14 after forty minutes but it would be the Raiders who would stretch their lead in the middle stanza.

Carson Perreaux would deflect home his first of year, giving Prince Albert a two goal cushion heading into the third but the Oil Kings would finally bounce back, when Ewanyk knocked home his first of the year, with Edmonton on the power play. With the momentum clearly on their side, the defending Western Hockey League champs were looking to complete the comeback but that was put to rest, when a local kid would put the final nail in the Oil Kings coffin.

Two time 30 goal man and Edmonton native, Mark McNeill ripped a bad angle shot past Jarry, that the Oil Kings netminder would dearly love to have back, restoring the visitors two goal cushion. Defenceman Josh Morrissey would make it 4-1, with an empty netter in the dying seconds, dropping the Oil Kings to 2-2 on Rexall Place ice.

Edmonton will look to end their mini two game slide on Saturday night, as they play hosts to the 2-3 Saskatoon Blades at 7:00 pm. The Blades will likely head into Rexall Place on rather weary legs, after facing the Swift Current Broncos on Friday night.
Posted by Oil Drop at 1:34:00 am