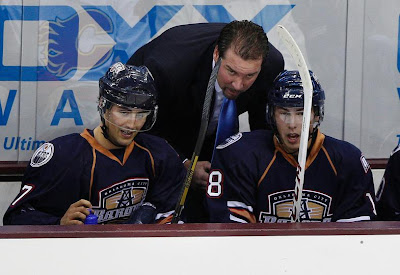 With the Oklahoma City Barons opening up their 2012-2013 campaign this past weekend,  fans have had to not only watch Eberle and RNH skate around in a Barons jersey but also get their first look at highly touted prospect Justin Schultz. Can you say disappointing? I know I can.

It was a forgone conclusion that NHL was going to have some sort of work stoppage but  now that we are well into October and there appears to be no end in sight, my interest has started to fade in what should be a pretty entertaining team in Oklahoma City.

Schultz has impressed in Oklahoma's opening two games, picking up a goal and an assist, but the rest of the "so-called" star attractions have been quiet. The Nuge and Eberle were held pointless, as were Magnus Paajarvi and Anton Lander. While I'm guessing some Oiler supporters are surprised that the Oilers dynamic duo are not already making a "mockery" of the AHL, they really shouldn't be.

The American Hockey League, more often than not, is an entertaining brand of hockey to watch. Having said that, the likelihood of Nugent-Hopkins and Eberle being fully engaged, in my mind, is very slim. They are both professionals and obviously have certain aspects of their games, that they want to work on but this isn't where they want to be. They want to be play hockey  in the best league in the world...not puttering around in the minors, making a fraction of their regular salary.

Don't get me wrong, I fully believe and expect the likes of Paajarvi and Schultz to become better players because of the time they will ultimately spend in OKC but as far as the "Big Three" go, don't count on it. They'll have their games in which they dominate but it will not be a nightly occurrence.

Hell, as someone who has followed the game extensively over the past 30 plus years, I find myself far more interested in putting my time elsewhere. Be it covering and watching the Major League Baseball post season, tennis, soccer and both the Canadian and National Football Leagues. Without question, this lockout has hit a nerve for me personally. For that reason, my interest in the Barons, at least for the time being, will be lukewarm. Which is something I would have never thought possible.
Posted by Oil Drop at 5:53:00 am