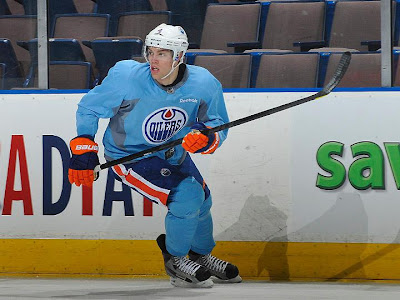 With Edmonton having built a highly skilled core of youngsters over the last number of years, one could argue that point ad nauseam but make no mistake...Hall is the guy that makes this team tick and remains the straw that stirs the drink. If the Oilers newly appointed assistant/alternate captain can manage to remain relatively healthy, do not be surprised to see the club make their long awaited return to the Stanley Cup Playoffs.

While Jordan Eberle has led the Oilers in scoring in each of the last two seasons, finishing in a tie for fifteenth place among all NHL skaters during the 2011-2012 campaign, Hall has been the guy that, more often than not,  was the best player on the ice. Unfortunately for the former Windsor Spitfires standout, the injury bug has follow him around during his first couple of years in the National Hockey League.

Be it hurting his ankle in a fight with Derek Dorsett or having his head stepped on by teammate Corey Potter in a freak accident during a pre-game skate, it seems as though Hall has had his fair share of bad luck over the last couple of seasons. That being said, after being knocked out the Oilers lineup in late November with a shoulder injury, he returned to action three weeks later and was instantly Edmonton's best player on a nightly basis...and it wasn't even close.

Despite playing in just sixty-one games, Hall still scored twenty-seven times and actually scored at a better clip, (.443 to .436), than Eberle and his team leading thirty-four goals. On top of that, Taylor became the trigger man on Edmonton's  power play, finishing in a tie for fifth in the league with thirteen goals on the man advantage, and morphed into "the energy guy" within this lineup.

It was much of the same for #4 down in the American Hockey League, outside of having to wear the #22 on his back. Despite missing the first eight games of the season and having not played a game since the mid-March,  thanks to off-season shoulder surgery, Hall scored on his first shift in an Oklahoma City Barons jersey and was on the verge of joining Eberle and defenceman Justin Schultz as the AHL's top three scorers, when the NHL Lockout finally came to an end.

In twenty-six  games on the farm, the future Oilers captain put up thirty-four points and was leading the league with ten power play goals. Let's be honest here. The kid is simply that good and it is just a matter of when he busts out a monster season at the NHL level, not if. Even at this early stage of his development, when Taylor decides to turn it up a notch, there is quite literally nothing anyone can do to slow him down.

His combination of skill, speed and power have intimidation written all over them.

Having said all that, probably the most impressive and important improvement he made to his overall game in Oklahoma City, was his ability to stay away from those Cory Sarich styled hits, that prematurely ended his season in 2012. Make no mistake, all the youngsters were marked men down in the AHL and the fact Hall did not place himself in a vulnerable position, speaks volumes about his maturity level and recognition that a change needed to be made.

As an added bonus, there appears to be no ill effects, be it on the ice or between his ears, when it comes to the condition of his surgically repaired shoulder. He did not shy away from contact in OKC and was frankly the one initiating it on an almost nightly basis. Now the questions becomes, can he survive those predators that lurk in almost every NHL dressing room? Only time will tell.

All things being equal, watching the trio of  Eberle, Hall and Ryan Nugent-Hopkins bloom in front of their very eyes, was remarkable for the fans to see and brought back fond memories to the franchise's glory days, for many longtime Oilers supporters. With all three being a year older and a year wiser, and the additions of Schultz and Nail Yakupov into the mix, this could be the year they start to impose their will on the opposition...be it on the power play or at even strength.

There is no question that Taylor Hall has had some bumps along the way but he has still managed to show a marked improvement in his overall game, in each of his first two seasons in an Edmonton Oilers uniform. There is no good reason to think that trend will not continue in 2013 and the Oilers will be the biggest beneficiary, in his climb towards becoming one of the best all around players in the game today.