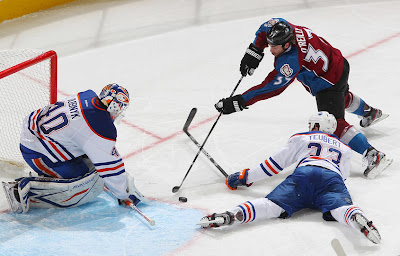 Anyone that followed this team during the 2011-2012 campaign, are well aware of just how good #40 was down the stretch for the Oilers. He put together a 16-11-3 record, with a 2.47GAA and a .920 SV%, over his final thirty-two appearances. Impressive numbers at any point but when one considers just how bad and undermanned this team was in their own end last year, they look that much better.

That being said, the leash for the former first round pick will be a short one. At the age of twenty-six, Dubnyk is in no way shape or form a young guy. He is entering the prime years of his NHL career and will likely never be handed a better shot a proving his worth, than the one he will given by head coach Ralph Krueger.

The former Kamloops Blazers puckstopper, will see the bulk of playing time in Edmonton but will still have a strong veteran presence, in Nikolai Khabibulin, to lean on for support. Add to that, the fact the Oilers roster has not looked this good, strictly from a talent standpoint, since probably the late 1980's and one realizes the organization has finally manged to somewhat insulate their starting netminder with support.

Is this team a finished product? Not at all but Dubnyk can rest assured, that should he allow a couple of pucks to get past him, this lineup will be more than capable of keeping them in every game. Heading into his fourth NHL season, Devan needs to focus on one thing...not allowing that back breaking softie, be it in the first or third period, and being consistent from one period to the next.

Every goalie allows a bad goal to sneak through from time to time and/or have those night's when they look as though they could not stop a beach ball. It is the nature of position. However, it will be those exact situations, that will determine if Dubnyk has what it takes to be a legitimate National Hockey League starting netminder.

He has his holes in his game but every goalie does. At this stage of his "development", it has nothing to do with style points but everything to do with pressure. Guys who demonstrate the ability to perform at their best,  when it matters most, are the guys you want to go to war with.

To this point in his career, Devan Dubnyk has not shown that he is ready to be that type of go-to-guy. He will be given the opportunity to run with it starting from Game 1 in Vancouver on Sunday night. The rest is up to him.