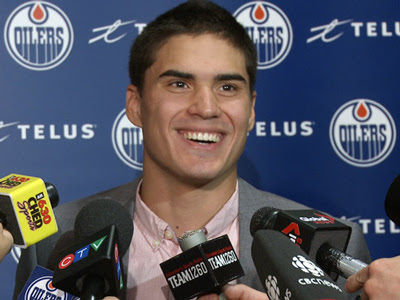 Steve Tambellini and company knew what they were getting when they decided to take the talented Russian with the first pick at the 2012 NHL Entry Draft. The kid is highly skilled, a great skater and has a wicked shot...all things you would expect from a first overall selection.

While the likes of Jordan Eberle, Taylor Hall and Ryan Nugent-Hopkins are great players, all three are fairly mild mannered when it comes to how they carry themselves on the ice. They desperately want to win and appear willing to do anything necessary for this team to have success.

Yakupov looks to be cut from the same cloth, with one major difference. When he hits that ice, the youngster is nothing but a ball of energy and has an edge to him. Be it celebrating goals during an inter-squad scrimmage or taking a poke at the local media, as he did last week with Hall of Fame writer Terry Jones, the kid is all about having a good time.

Some will view him as being "cocky" and in my mind, there is nothing wrong that. Do any of you honestly believe he is anymore "cocky" than say Eberle, Hall or the Nuge? Yakupov may come across as a little more on the "brash" side of things but let's not kid ourselves here. Any successful athlete has a cockiness to them. It may be more toned down in some but make no mistake, it is still there.

In my mind, it's a refreshing change and something that has been missing from the Oilers roster for a very long time. Again, he will rub some people the wrong way but if there is one thing a team that has missed the playoffs for six straight years needs, it is energy...and adding his skill set into the mix doesn't hurt either.

Dropping a player with Yakupov's talent, into a forward group that already features four world class talents in Eberle, Hall, Nugent-Hopkins and Ales Hemsky, will make the Oilers a handful for any team to deal with. Frankly, you would be hard-pressed to find a more talented top six anywhere in the league.

With head coach Ralph Krueger likely turning to the trio of Eberle-RNH-Hall as his number one line to start the season, the nineteen year old Russian will find himself in good hands with Hemsky.

This will be season number ten for the veteran forward in an Oilers uniform and don't be surprised to see the arrival of Yakupov give him a new lease on life. After struggling with injuries and a lack of quality linemates over the last number of seasons, Hemsky looks poised to have a big year.

As one of the elite playmakers in the entire NHL, he has been forced to go at it without the presence of a true one-shot scorer since Petr Sykora left town...which was back in 2007. I would say it's a pretty safe bet that #83 is more than little excited to see what he can get done with a talent like Yakupov.

Make no mistake, the former Sarnia Sting standout will have his bumps along the way but he will not be the focal point of the Oilers attack, minimizing the amount of "tough" matchups he will have to face on a nightly basis. Regardless of where he ends up playing in the lineup, elite players generally rise to the occasion when called upon and that is exactly what the Edmonton Oilers have in Nail Yakupov.