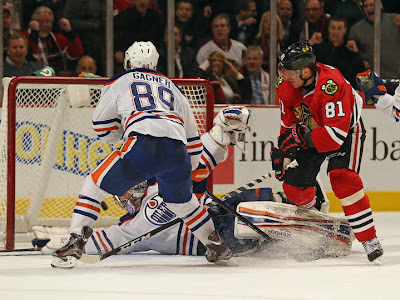 The Edmonton Oilers kicked off their lengthy nine game road trip against the best team in the NHL on Monday night, earning a very important point in their 3-2 overtime loss to the Chicago Blackhawks. Marian Hossa scored 1:44 into the extra session, despite a valiant effort from netminder Nikolai Khabibulin, keeping the Hawks near perfect season intact.

Defenceman Jeff Petry and rookie Nail Yakupov scored for the Oilers, who were still without the services of Taylor Hall, serving the final game of his suspension for nailing Minnesota Wild  forward Cal Clutterbuck during last Thursday's tilt between the Northwest Division rivals.

Centre Sam Gagner continued his strong start to the season, picking up another assist in the loss, giving the twenty-three year old eighteen points through his first eighteen games of the season.

Heading into the United Center, with the best player in the press box and the task of facing the 15-0-3 Blackhawks, it appeared as though Edmonton would need some good fortune to start their seventeen day trek off on a winning note. Lucky for them, that got exactly that...courtesy of Chicago's All-Star blueliner blowing a tire four minutes in.

With the Hawks on the power play and defenceman Ducan Keith carrying the puck up ice, the former Team Canada rearguard's skates gave out at centre ice, as he tripped over the red line and handed Lennart Petrell a clear-cut breakaway. While the feisty Finn easily undressed a startled Ray Emery, his initial shot caught nothing but iron, luckily the rebound landed onto the blade of a hard-charging Jeff Petry, who hammered home his first of the campaign into the yawning cage.

The goal was Edmonton's second short-handed tally of the year and gave Ralph Krueger's crew the start they were looking for. Unfortunately the lead would be short-lived, as Patrick Kane maneuvered his way through a maze of Oilers penalty killers, before sliding home his tenth of the season past a helpless Khabibulin, It was as exquisite a finish as you will see and one that brought the United Center to life.

Despite the quick reply, Edmonton were able to stop the bleeding and would in fact take their second lead of the night, 14:17 into period two. With Bradon Saad off for the second time in two periods, this time for high-sticking, the Oilers struggling power play suddenly came to life. After gaining possession inside the Chicago zone, Gagner would eventually find Yakupov with a perfect cross-ice feed, that the Russian sniper ripped over Emery for his sixth of the campaign.

On a night in which the talented winger saw next to no ice time at even strength, the former first overall pick made the most of his limited chances. It was a huge goal for the visitors and one that silenced the Blackhawks faithful. After forty minutes of play, Edmonton held a 2-1 lead, despite Chicago having a huge territorial advantage.

However the Hawks wasted little time in finding the equalizer, as Viktor Stalberg punched home a loose puck under Khabibulin, just over two minutes into the third period. It was a comedy of errors that led to the goal. From the Oilers tender losing sight of the puck and where he was in his crease, to a poor line change and some god awful defending in front of their net.

Just like that, we were tied and the ice started to tilt more and more, with each passing minute. Fortunately for Edmonton, the former Blackhawks starter was up to the task, getting his side into the extra session and earning the Oilers a single point...at the very least.

Sadly, Edmonton had no answer for the mighty Hawks in the extra session, as Patrick Sharp easily undressed Petry, before driving to net and being stoned not once but twice by Khabibulin, who followed that up with a point blank robbery off Hossa. However, shot number four would find its way to the back of the net, giving the absurdly talented Czech his ninth of the season and Chicago their sixteenth win on the year.

It was a tough way to lose, as Perty and Ladislav Smid were badly out muscled in front of their goal, while Gagner and Ales Hemsky stood frozen in time, instead of lending a hand to their over matched linemates. That being said, earning a point from the Hawks, is no small feat. Only six other teams have managed to accomplish that in the early part of 2013...something which should not be lost on those in Oil Country.

Edmonton will have the next two days off, before taking on the Dallas Stars on Thursday night at the American Airlines Center. The Oilers will have Taylor Hall back in the fold against the Stars and likely go back to Devan Dubnyk between the pipes.

With Edmonton set to take on the Blues on Friday night in St.Louis and the Minnesota Wild on Sunday evening, don't be surprised to see Dubnyk and Khabibulin split the first four games of the road. swing. After that, look for Krueger to possibly ride the hot hand in four of the final five games on the trip.
Posted by Oil Drop at 2:54:00 am