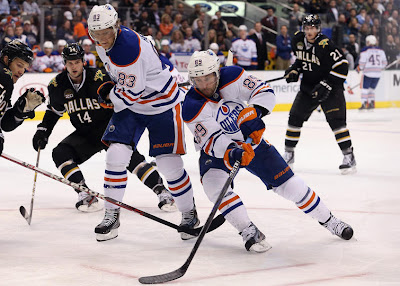 On the strength of a three point night from Ales Hemsky and the return to action of Taylor Hall and Devan Dubnyk, the Edmonton Oilers pulled out a much needed 5-1 victory over the Dallas Stars on Thursday night. Defenceman Justin Schultz continued to add to his impressive rookie campaign with another two point effort, while Dubnyk picked up his first win since February 10th in Columbus.

Through the first eighteen games of the 2013 season, the Oilers had very few breaks go their way. That all changed on Thursday night in the Lone Star State, as they used a couple of friendly bounces to their advantage.

Sam Gagner continued to find ways to hit the scoresheet, sliding home his sixth of the campaign, on a shot Kari Lehtonen would love to have back. Usually an Oilers killer, Lehtonen was making his first start in almost two weeks due to a groin injury, had Gagner's bad angled shot elude him all of seventy-three seconds in.

Not the start the Stars were hoping for but one Edmonton could not have scripted any better. An early goal against a goalie they rarely score on and at even strength to boot. They made it two-for-two before the period was out, as Jordan Eberle found a streaking Schultz for a beautiful backdoor goal, giving the Oilers a two goal cushion.

Despite jumping out to an early lead, Edmonton could thank their netminder for keeping it a two goal bulge heading into the intermission. After struggling in recent outings and watching Nikolai Khabibulin deliver elite level netminding over the last week or so, Dubnyk returned to his early season form.

The Oilers starter stood tall, stoning Jamie Benn on two separate occasions and robbing Stephane Robidas from point blank range. With twenty minutes in the books, it appeared as though the calm, cool and collected #40 was back.

After accomplishing next to nothing on a pair of second period two man advantages, Edmonton would catch a huge break in the dying seconds of the middle stanza. Jeff Petry would find the back of the net for the second straight game, as his shot/pass on net deflected off defenceman Trevor Daley and past a helpless Lehtonen to make it 3-0 for the visitors.

Forty minutes in and the Oilers not only had themselves a three goal lead in a building they simply never win in but they had three even strength goals to boot. It was a long time coming for Ralph Krueger's crew and they kept pouring it on in the third.

They would get their first and only power play goal of the night, courtesy of a wicked Ales Hemsky wrist shot, moments after Nail Yakupov was robbed of his fifth power play marker by Lehtonen and the crossbar. The talented Czech's finish was simply exquisite, firing his eighth of the season past the Stars puckstopper, to put this one to bed.

Ben Eager would make it 5-0 midway through the final frame, slamming home a lovely feed from Lennart Petrell , for his first of the year, but Jaromir Jagr would break Dubnyk's shutout bid just over two minutes later. It was the future Hall of Famer's sixth of the season but third against the Oilers big netminder.

With Edmonton back in action on Friday night in St.Louis, they will need another strong performance from their netminder in hopes of securing points from the hard working Blues. Two games into their season-high nine game road trip, the Oilers have collected three of a possible four points and now find themselves twelfth in the Western Conference.

That being said, they are all of four points back of the Vancouver Canucks for top spot in the Northwest Division and three back of the fourth place Detroit Red Wings. In other words, right in the thick of things.
Posted by Oil Drop at 12:33:00 pm