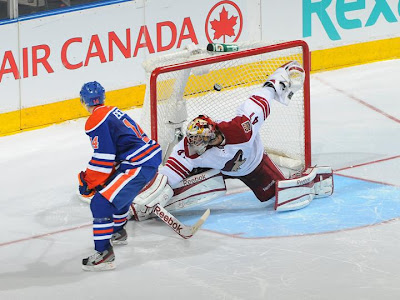 After leading the Edmonton Oilers in scoring for each of the last two seasons, there were high expectations for Jordan Eberle heading into the 2013 campaign. However, through many of the club's first sixteen games, #14 had looked somewhat lost for the first time in his young NHL career.

That all changed on Saturday afternoon, as the young sniper was monumental in leading the Oilers to a come from behind 3-2 victory over the visiting Phoenix Coyotes. Eberle scored for the third time in four games and capped off his impressive afternoon, with the shootout clincher.

Nikolai Khabibulin was a surprise starter for the Oil but the veteran puckstopper did not disappoint, stopping thirty-four of the thirty-six pucks directed his way and was a perfect two-for-two in the shootout. The win evened his record to 2-2 on the year, while lowering his GAA to a minuscule 1.89 and improving his save percentage to .942 on the season.

In desperate need of two points before heading off on their season high nine game/seventeen day road trip, things did not get off to the best of starts for Ralph Krueger's men. Kyle Chipchura staked the visitors to an early lead, bouncing a bad angled shot off defenceman Nick Schultz and just past Khabibulin, before much of the afternoon Rexall Place crowd had found their way to their seats.

It would only get worse from there, as Matthew Lombardi pounced on a loose puck midway through the second, sliding home his first of the year with Schultz in the sin bin for high sticking. Not exactly how the Oilers or the Sr, Schultz had envisioned things going.

Typically, a two goal deficit against the stingy Coyotes is nearly insurmountable but that would not be the case on this afternoon. As a smart but simple play from rookie Nail Yakupov would cue the comeback.

It was a routine dump in from Sam Gagner, which Yakupov chased down and turned into an absolutely gorgeous no-look pass to a hard charging Eberle. The finish from the Oilers triggerman was simply exquisite, flipping the puck up and over Mike Smith from tight quarters, but looked to be nothing more than your run of the mill move from the former Regina Pats standout.

Just like that, Edmonton had found life and turned it up a notch. Both Smith and Khabibulin continued to stand tall but the Oiers would finally get their equalizer, midway through the third. Coming courtesy of their slumping power play, a lucky bounce and the first of the season from one Teemu Hartikainen.

A poor clearance attempt from Oliver Ekman-Larsson, allowed Justin Schultz to fire a quick point shot on goal, which Ryan Smyth neatly deflected but instead of forcing Smith to make a difficult stop, the puck ricocheted over to the wide open Finn, for an easy tap in.

It was a fortunate break but this team had coming.

The goaltenders did the rest, getting this one into overtime, where Smith was outstanding during another Oilers power play and forcing this one to a shootout. With the two netminders having already stopped three breakaways during regulation, this one had all the makings of a lengthy shootout.

It was anything but.

Gagner decided to debut his new shootout move on Saturday afternoon and Smith is likely still wondering what hit him. Words can't do the move justice so please, have a look below and be amazed. The Oilers guardian followed that up by stoning Mikkel Boedker, which brought Eberle to centre ice.

After being Edmonton's go-to-guy in the shootout during his first two seasons, the twenty-two year old had yet to be given a chance by his new coach during 2013. Maybe it was the fact he had not been selected to take part in the "skills competition" earlier in the season but Eberle look as determined as eve, in easily beating Smith with his trademark backhand finish.

Khabibulin did the rest, stoning David Rundblad to clinch the victory and give Edmonton the two points they so desperately needed.

For this team to come back from a two goal deficit on a team like Phoenix, without their best player in Taylor Hall, having won just two of their previous ten outings and staring at road trip that will take them out of town for the next two and a half weeks, these two points could very well have just saved their season.

While it's still early, even in an abbreviated 48 game season, mark this to remember date. As it will likely be the turning point in the Edmonton Oilers season.