Belov should help the Oilers blueline in 2013-14 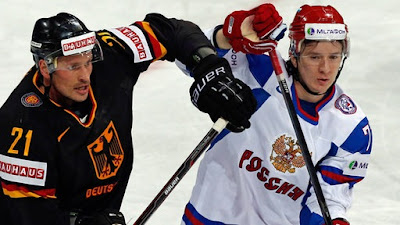 When word came down the pipe that the Edmonton Oilers had agreed to terms with free agent defenceman Anton Belov on a one year/$1.525 million deal, many were caught off-guard by the news. Apparently we had all grown so accustomed to watching Steve Tambellini's "sitting and waiting" act, that no one was prepared for such a quick strike from the Craig MacTavish regime.

Clearly, the new general manager isn't messing around and plans on being quite aggressive in addressing his roster's needs. Hard to predict what type of immediate impact a player like Belov could have in the NHL but his addition addresses a couple of gaping holes on the Oilers blueline - size and puck moving ability.

By the sounds of various scouting reports on the 6’4, 219 pound defenceman, he does not appear to be overly physical but is more than capable of taking care of himself and is decent in his own end of the rink. Granted, those are based on what that have seem from him in the KHL and IIHF World Championship not the National Hockey League but the overwhelming feeling among those whom have seen him play regularly,  is the soon-to-be twenty-seven year old can play in the NHL.

Belov put together a nice campaign in 2012-13, scoring nine times and chipping in with seventeen assists in forty-six games, far and away his best season as a member of the Avangard Omsk. While the numbers look good, expecting the Russian rearguard to reproduce anything close to them in Edmonton, would likely be nothing more than wishful thinking.

Prior to his nine goal outburst, Belov had scored a grand total of six in four previous seasons with Omsk and at the age of twenty-six, it is not as though he was a twenty-year old kid coming into his own. Having said that, the fact he is a veteran left-handed shooting defenceman, that can transition the puck up ice, makes him an absolute godsend for head coach Ralph Krueger.

On a roster that currently features zero left-handed puck movers on the backend, Belov could turnout to be just what the doctor ordered. No question MacTavish needs to go out and acquire a top pairing defenceman prior to the start of next season but should he accomplish that, suddenly the Oilers blueline would no longer look as paper-thin as it once did.

In a perfect world, having Justin Schultz paired with Ladislav Smid for his sophomore campaign, would seem to be the most logical move to make along the blueline. Leaving Jeff Petry the task of playing top pairing minutes, with whomever the club ultimately decides to bring in as their number one defenceman. With the right partner, Petry should be able to handle the role that was far too much for he and Smid to take on during the abbreviated 2013 season.

Also, don't forget the former second round pick will be in a contract year and looking to make a statement to the Oilers brass. At twenty-five year's old, Petry has reached the stage of his career where he needs to prove exactly what type of player he is at the NHL level. Hopefully, he will be given the opportunity to do exactly that, in a setting which allows him a chance for success.

Bringing us back to the addition of  Belov. As things stand at the moment, the favourite for the number seven role looks to be Corey Potter. He is signed for another season at the paltry sum of $775,000 and has shown the ability to contribute at both ends of the ice, albeit in a limited role. Leaving that final third pairing role up for grabs.

Nick Schultz has a year remaining on his current deal at $3.5 million. In my mind, it made sense to seriously consider moving the veteran blueliner, in order to change the complexion of the Oilers backend. That was prior to his GM's signing of last week, which should all but guarantee the former Minnesota Wild captain will be playing elsewhere come next season.

Belov was brought on board to play a regular role for the coming season and with Schultz being a left-handed shooting defenceman, he simply longer has a spot. Just do the math. The thirty year old will slot in behind Belov, Smid and whomever the Oilers acquire to play top pairing minutes.

All that being said, perhaps the biggest plus of all, could be rookie Oscar Klefbom quite possibly starting his pro career with the Oklahoma City Barons. Let's be honest here, Belov was brought in for two reasons. Obviously, the first being to help the club in the here and now but also to keep the seat warm for Klefbom. There is no need to rush the talented Swede into the NHL and giving the Oilers coaching staff some actual tools to work with, should keep them from doing exactly that.

Craig MacTavish had three holes to fill on his backend heading into the off-season. He addressed one of those in signing Anton Belov and in the process, may have found this organization a diamond in the rough. Should that not turnout to be the case, at the very least, he improved his roster for the short-term and at next to no risk. All things being equal, it was a pretty shrewd move from the Oilers rookie GM. Now let's see if he can acquire the other necessary pieces of the puzzle, to round out the backend.
Posted by Oil Drop at 10:50:00 am