Malhotra could be good short-term fit for the Oilers 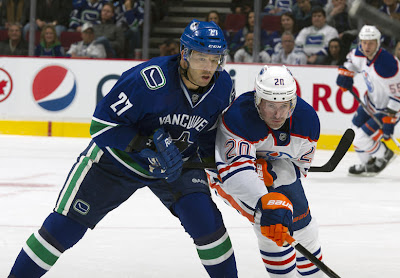 When the Vancouver Canucks decided to shutdown Manny Malhotra after watching him play just nine games during the abbreviated 2013 season, it seemed as though his thirteen year NHL career was all but over. That being said, Malhotra does not appear to be quite ready to call it quits.

Should the apparent vision issues that have plagued the veteran centre since suffering a nasty eye-injury back on  March 16, 2011 be deemed good enough to continue playing in the National Hockey League, perhaps Edmonton Oilers GM Craig MacTavish will put in a call to the veteran centre and gauge his interest in possibly playing in Oilers silks.

While the Canucks found it rather difficult to shutdown the now thirty-three year old in mid-February, general manager Mike Gillis said he "wouldn't put anyone in a position where I thought they couldn't protect themselves". Fair enough but if Malhotra were to receive clearance to continue playing, it would be pretty hard for a team like the Oilers to not have serious interest.

The former seventh overall pick becomes an unrestricted free agent this summer and will be far more interested in finding an opportunity, rather than cashing in on a payday. His days of signing a big money deal are a thing of the past but earning a $1 million contract from a club in desperate need of  bottom six forwards, hello Edmonton, could definitely be out there for the former Columbus Blue Jacket.

During his first two seasons in Vancouver, Malhotra continued to put up his usual numbers in the faceoff dot, 61.7% and 58.5%, and followed that up with a 65.3% success rate during his brief nine game run in 2013. Obviously, he is more than capable of still taking draws and remains one of the better conditioned athletes in the league. The question is not whether or not he can still get the job done but rather, if his vision will allow him to do it and "protect" himself in the process.

For the Oilers, the move would make perfect sense. Adding a veteran player who has always been looked upon as a great locker room guy and always tried to be a difference maker when he hit the ice, seems like a no-brainer. Does that not fit the bill of the exact type of player MacT was hoping to bring to Edmonton for 2013-14?

With all signs pointing towards Sam Gagner re-signing with the Oilers and Eric Belanger likely on the way out of town, the need for help down the middle is obvious. Belanger was the only centre, who saw regular duty with Edmonton in 2013, that had a faceoff number north of fifty percent. Take him out of the equation and suddenly we are back to the days of watching Shawn Horcoff take nearly 1,500 draws a season and becoming frankly worthless over the last half of the year.

Again, if healthy, Malhotra would not only fill that role but also add another solid penalty killer and likely be far more engaged than Belanger, who looked almost disinterested at various points of his two year stint in the Alberta capital. Not to mention, the 6'2", 215 pound Malhotra being far more difficult to play against on a shift by shift basis. Regardless of how you look at it, he would definitely be an upgrade on the former Phoenix Coyote centre.

Craig MacTavish hasn't pulled any punches when it comes to his club's need to upgrade their bottom six, Bringing in a player of Manny Malhotra's stature could go a long way in helping correct what's wrong with the bottom half of the Edmonton Oilers forward group. For his sake, let's hope Malhotra is able to continue his NHL career and possibly take that call from the Oilers new general manager
Posted by Oil Drop at 7:27:00 pm