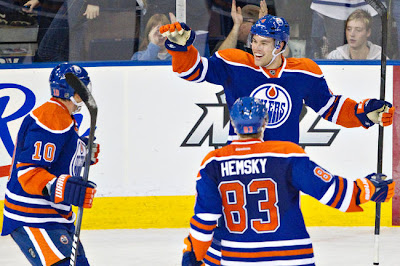 In the world of professional sports, losing should never be viewed as an acceptable outcome. No matter the sport or situation, a loss should always have a lasting sting. Plain and simple. Having said that, when you are a part of as many losing seasons as Ales Hemsky and Shawn Horcoff have been as members of the Edmonton Oilers, sometimes that result can almost become an afterthought.

Rookie general manager Craig MacTavish appears unwilling to want to test that theory out during his first full season at the helm of this ship. After giving yet another candid interview to local media, this one coming  courtesy of the Team 1260's Mark Spector, it would seem unlikely for fans to expect to see either Hemsky or Horcoff back in Edmonton for the 2013-14 campaign.

MacTavish had previously mentioned how losing can sometimes "have a little bit of a negative effect on your spirit" in discussing tendencies of veteran players who have had the misfortune of being part of a losing culture, for an extended period of time.

However, he decided to take that a step further during his one-on-one interview on the Thursday edition of  the Mark Spector Show. In discussing the possible futures of two of the team's longest serving members, MacT did not pull any punches.

While he once again mentioned how he holds both players in very high regard, he also added this little nugget to the equation. “I think from both our perspectives an ideal scenario would be to move them on and wish them the best in the next destination". Obviously, the matter-of-fact like answer caught some Oiler fans off guard and left them wondering what they could be in store for over the next few weeks.

In my mind, the comments were more than fair and with both having spent their entire NHL careers in the Alberta capital, post-season appearances have been far from a regular occurrence. In fact, this duo would be on the complete opposite end of the spectrum, in a league in which over half the teams qualify for post-season play on a yearly basis.

Horcoff has managed to reach the playoffs just three times in his twelve seasons in Oilers silks, while Hemsky has made it twice over what has now been a ten year NHL career. Pretty damning stuff and likely very difficult for either one to readily accept. Though at what point, does one to start to give in to their lack of success and simply accept what seems to be the inevitable?

Unfortunately for them, MacTavish is all too familiar with what this sort of situation could turn into. Let's not forget he saw first-hand how bad this sort of situation could become, when former captain Ethan Moreau and alternate Steve Staios, allegedly self-destructed and played a large role in turning Edmonton's dressing room into an all out gong show, just a few short years ago.

As older players, they did not adjust well to the Oilers constant losing, coupled with the likes of Sam Gagner and Andrew Cogliano coming in and being the centre of attention. While there is no concrete evidence of that being the case in the here and now, there is no way the current management team will risk something similar happening this time around. Apparently the time to look at changing the mindset among the group, has finally arrived.

The one positive to come from all this losing, has been the organization's ability to build a pretty stellar core of youngsters in Jordan Eberle, Taylor Hall, Ryan Nugent-Hopkins, Justin Schultz and Nail Yakupov but at some point, a transition in the leadership group had to be part of the equation. Which doesn't necessarily mean all of that needs to be thrown onto the shoulders of Hall but continuing to march on with the status quo of Hemsky, Horcoff and Ryan Smyth, is not the answer.

Next season will mark the beginning of Hall and Eberle's rather lengthy second NHL contracts, something which should be viewed as a bit of a benchmark for this franchise. Edmonton have basically wasted away the first three years of their NHL careers, in trying to re-build this roster from scratch. In their defence, going in the direction they did, takes time to develop players but at what point do the results start to matter?

After each of the last two seasons, Eberle and Hall were the ones going on about how much losing sucks and that things need to change, not the vets. That group was to busy giving us the cliched answers we have all come to expect. Whereas these two kids were flat out saying, enough is enough. No more excuses. The time to turn the corner is now.

Anyone that watches this team on a regular basis, knows that losing does not sit well with either of those youngsters. However at this stage of the game, the same can't be said for the vast majority of veterans inside that room. It did not happen overnight but this club's lack of success, has sucked much of the fight and want to win out of guys like #10 & #83.

In fairness to the player, it is not their fault. Circumstances were what they were and the outcome wasn't pleasant for anyone involved. Which is all well and good but it now leaves Craig MacTavish the task of cleaning up the mess and ensuring history does not repeat itself. Both players have been very good players during their days in Edmonton but the time to turn that page, appears to have finally arrived.
Posted by Oil Drop at 2:25:00 pm