Frolik would be a nice addition to the Oilers top nine 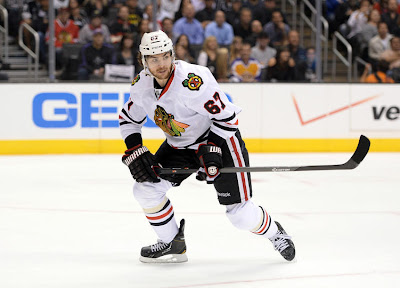 Michael Frolik has always intrigued me as a player. Ever since being drafted tenth overall in the 2006 NHL Entry Draft by the Florida Panthers, the talented Czech has always been a player I have kept my eye on. After putting up back-to-back twenty-one goal campaigns in his rookie and sophomore seasons, it looked as though he was well on his way to becoming a legitimate top six NHL forward.

With his entry level contract set to expiry following the 2010-11 season and after struggling to put the puck in the back of the net during the first half of the year, though still on pace for his third consecutive forty plus point season, the Panthers decided to ship Frolik off to the Chicago Blackhawks on February 9th, 2011. The deal cost the Hawks their former seventh overall pick in Jack Skille but in my mind, it was a steal of a deal for Chicago.

While the former Rimouski Oceanic standout had battled through inconsistencies through his first three years in the National Hockey League, his talent level was undeniable. Like most young offensive minded players, Frolik's commitment to the defensive side of the game was not always there but adding his skill set into the Hawks already talented group, seemed to have the makings of a very nice fit.

Unfortunately for him, the warts in his game did not sit well with head coach Joel Quenneville. During his two plus years in a Hawks uniform, Frolik has seen very little time inside Chicago's already stacked top six and has basically been forced to reinvent himself as a player. To his credit, he has managed to do exactly that and earn himself playing time in roles, frankly no one would have never expected to see him in.

The twenty-five year old has carved himself out a niche in the Hawks bottom six and becoming a key contributor to Chicago's top penalty killing unit, with centre Marcus Kruger. After putting up 117 points in 213 games as a member of the Florida Panthers, Frolik has collected just 34 points in 136 appearances in a Blackhawks uniform. So much for those "Baby Jagr" comparisons but to be completely fair, those always seemed a  little outlandish and he has never truly been afforded the opportunity to relocate the offensive side of his game under Quenneville's guidance.

The funny thing with Frolik, as little as he has produced during the regular season, he has found a way to contribute come playoff time. In thirty-one post-season games, he's picked up fifteen points, scoring seven goals, after scoring all of eleven during the aforementioned one hundred and thirty-six regular season contests. In my mind, the kid has turned himself into a solid all-around player and just needs a chance to show he can still put up points.

With the Blackhawks being one of those teams facing a bit of a cap crunch in 2013-14, general manager Stan Bowman will have some work to do during the coming off-season. While Bowman already has his core pieces signed to long term deals, he does need to ink the likes of Bryan Bickell, Kruger and Nick Leddy, on top of bringing in a backup goalie. Not exactly a long to-do list but with Chicago having roughly $2 million in cap space to work with, he definitely has his work cut out for him.

The emergence of Brandon Saad, coupled with the Hawks top six being what it is, the likelihood of Frolik earning a shot, seems highly unlikely. With the two-time twenty goal man entering the final year of his three year contract, $2.3 million cap - $1.9 million real money, and likely not overly excited about being pegged as a third/fourth line winger at the age of twenty-five, a move out of the Windy City might just suit both him and the organization just fine.

With that being the case, you would have a hard time finding a better landing spot for the talented Czech, than the Alberta capital. With Frolik having added an element to his game that was never present during his time in Florida, his potential as a second/third line guy in Edmonton, would have to be something for Craig MacTavish to seriously consider.

Dropping a player with #67's skill-set into the Oilers top nine, could actually turnout to be a godsend. Frolik would instantly give new head coach Dallas Eakins, the potential of building three actual scoring lines...something this organization has gone on about for years but have never been able to accomplish.

There is no question,  the Oilers will go out and acquire a bigger body to address their need for size inside their top nine but bringing in the 6'1" 200 pound winger, would be the perfect compliment to such a move. Be it as a top six guy or anchoring a third line with the likes of a Magnus Paajarvi and whomever they bring in to replace Shawn Horcoff, Frolik would see major minutes and opportunity, in Orange and Blue.

One would think, he would not only slide onto the Oilers top penalty killing unit but also help shore up the second power play unit, as a possible replacement for Ales Hemsky. Seeing regular duty on both special teams, would all but guarantee Frolik, at minimum, 15-18 minutes a night...even as a third line player. A far cry from what, at times, has become a fourth line role with the Blackhawks.

The other bonus in all this, is by turning him into a bottom six checker, Chicago has all but killed his potential trade value. While I am sure there would be more than a few team's interested in taking Frolik on as some sort of "reclamation project", helping drive up his value somewhat, the return won't be huge. Plus, the likelihood of Bowman actually wanting to add another contract to the books, would be almost nil.

Meaning a prospect or pick, would probably be all it would take to add a Michael Frolik to the roster. Hard to imagine getting as talented a player, entering his prime years, for so little but that could very well be the case when it comes to Frolik. His lack of recent production will undoubtedly scare some off but in my mind, not making a pitch for him would be a huge mistake by the Edmonton Oilers.
Posted by Oil Drop at 9:55:00 am