Oilers could build a decent bottom six, with or without Horcoff 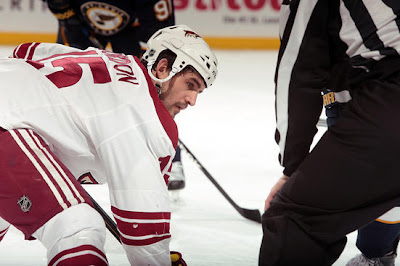 You can count me in the group of those who were rather surprised to hear Edmonton Oilers general manager Craig MacTavish, hint at the likely departure of Shawn Horcoff in the coming months. In my mind, he had one more year left in Oilers silks, before being moved or bought out of the final year of his deal.

Obviously, both Horcoff and MacTavish felt the move needed to happen sooner rather than later. Making the rookie GM's job of rebuilding the Oilers third and fourth lines an even tougher task to complete. Having said that, the opportunity to address this club's bottom six in one off-season, is still very much attainable.

While removing Horcoff from the equation creates a massive hole down the middle of the ice, especially in the face-off dot, it would allow the club the opportunity to seriously look elsewhere at possible replacements. Many have trumped pending unrestricted free agent Boyd Gordon as a possible target, should the Phoenix Coyotes specialist ultimately reach free agency, but in my mind, that was nothing more than a pipe dream...with the Oilers captain still in the picture.

For the soon-to-be thirty year old to seriously consider coming to the Alberta capital, one of two things would have to happen. The first being Gordon signing for some sort of ridiculous term or salary, which will not happen with MacT running the show in Edmonton. The other, finding an organization that would give him a legitimate shot at securing a spot inside the top nine, something the Oilers can definitely do, with Horcoff heading out of town.

Should he be unable to find either of those situations, the only option that would make sense for a player like Gordon, would be going to a legit Stanley Cup contender. For most players, it's about winning or opportunity and Edmonton can clearly offer the veteran centre the latter.

If MacTavish were to end up signing Gordon to deal on July 5th, he would likely be joining Mike Brown, Magnus Paajarvi and Ryan Smyth in the Oilers bottom eight forwards. One would think Brown and Smyth will end up sharing the 12th/13th forward spots for new head coach Dallas Eakins, leaving three spots inside the bottom six and the 14th forward role, still needing to be filled.

While what Edmonton ultimately decides to do with Sam Gagner and that final spot inside their top six, will greatly effect who ends up lining up on a potential third line with Gordon and Paajarvi, there are options out there. Be it a skilled forward that doesn't play a soft game and brings some size and/or speed to the table, previous suggestions in this very spot included a pair of Chicago Blackhawk wingers in Viktor Stalberg and Michael Frolik, or a hard-nosed vet which is tough to play against but still contribute a little something offensively, someone like Dallas Stars pending free agent Eric Nystrom.

Oilers NOW host Bob Stauffer has suggested in recent days, the organization could very well end up targeting a centre with "a year or two of AHL experience", to help address the club's lack of depth down the middle. The potential of that move, coupled with the likely inclusion of Anton Lander to the club's roster next season, could make the fourth line centre and extra forward spots a moot point.

Which would leave a vacancy for a fourth line winger. In my opinion, that player needs to have an element of speed to his game, as well as being willing and able to throw his weight around, when necessary. Not suggesting they need to add another Mike Brown to the roster but rather a player that brings a little more on a game by game basis.

The aforementioned Nystrom could easily fill that role as a third/fourth line winger, should Eakins decide to handout extra minutes to likes of Jordan Eberle, Taylor Hall or Nail Yakupov. With that in mind, another possible target, could be Nashville's Brandon Yip. The former eighth round pick of the Colorado Avalanche has always struggled with consistency but as a fourth line energy guy, that can help out on the penalty kill, the pending unrestricted free agent would not be a bad add for the Orange and Blue.

Moving Shawn Horcoff will undoubtedly make many Edmonton Oilers fans happy campers. Ever since signing his rather hefty contract prior to the 2009-10 campaign, he has become the whipping boy for the vast majority of fans. Regardless of what the masses may think, there is little doubt this team will miss having their captain around next season and Craig MacTavish could ultimately have tough time acquiring his replacement. That being said, it can be done and the smart money would be on MacT doing just that.
Posted by Oil Drop at 11:38:00 am