Upgrading the blueline has to be priority one 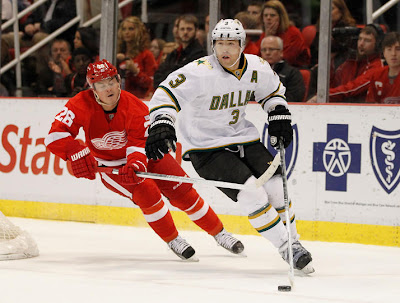 With the 2013 NHL Entry Draft just around the corner, much of the focus surrounding the Edmonton Oilers has revolved around the potential of them possibly moving their seventh overall pick. Regardless of what Craig MacTavish decides to do with this year's first round pick, one thing is painfully clear. In order for the Oilers to show any sort of marked improvement in the standings, upgrading their blueline must be the rookie GM's top priority.

At what point should the focus shift from acquiring young talented players, to actually trying to improve their current NHL roster? While adding a Sean Monahan or Darnell Nurse into Edmonton's already young core is an intriguing possibility, how would it make the team any better today? Doesn't winning hockey games need to become part of the equation?

For those that follow this team with any sort of regularity,  they are aware that the losing doesn't sit well with the likes of Taylor Hall and Jordan Eberle. They are tired of making excuses and their GM seems to be of the same mind-set.

As badly as this team needs to add size and a veteran presence into the forward ranks, bringing in a pair of proven NHL calibre defencemen, outweighs any other need this roster might have. In my mind, a "proven NHL calibre defencemen" is a guy who has played in the neighbourhood of 400 career games. Not someone like Toronto Maple Leafs blueliner Jake Gardiner, who has become the latest name attached to the Oilers in the rumour mill world.

While acquiring a player of Gardiner's quality would definitely be a nice long term addition, the only way it makes sense for today, is if MacTavish were to move one of the current defenceman, Jeff Petry(?), in a separate deal to acquire the rearguard they so desperately need. If not, it would be nothing but another sideways move for the organization.

There are few teams, if any, that are successful in today's NHL without some sort of veteran presence on their backend. In Edmonton, that honour belongs to an aging Nick Schultz and Ladislav Smid. Which explains why the Oilers struggled as badly as they did, during their late season playoff push.

The addition of Anton Belov  could prove to be a nice pickup but as they currently sit, the depth chart reads as such.

While all signs point to Schultz turning into a solid a top pairing defenceman, that won't happen over night and will likely take even longer, should he continue to be forced to take on situations, he simply isn't ready for. With prospect Oscar Klefbom waiting in the wings and probably not far off from earning an NHL job, this group needs help at the top of the batting order. Period.

In a perfect world, going out and finding another Chris Pronger style trade would be ideal but that won't happen. With teams across the league either signing their own pending unrestricted free agents or trading for the rights to UFA's and signing them to contract extensions, two names standout above all the rest for possible targets for Craig MacTavish...Stephane Robidas and Keith Yandle.


As far as Yandle goes, I have been saying he is what the Oilers need for last fifteen months. The soon-to-be twenty-seven year old is a power play quarterback, who is entering the prime years of his career and signed for the next three years at $5.25 million. The Coyotes defenceman has played major minutes for Dave Tippett's crew in each of the last four seasons but has been made available for a couple of reasons.

One being Phoenix's organizational depth on the blueline, including the NHL's next star defenceman in Oliver Eckman-Larsson. The second, the organization's lack of depth in their forward ranks. Be it moving a Sam Gagner in a deal for Yandle and than swapping the #7 pick for his replacement, can you say Ryan Johansen, or using the pick as the carrot to acquire the American blueliner.

Point being, Edmonton have the necessary pieces in place to make such a deal and the same goes for Mr. Robidas in Dallas.

With the Stars having traded for and signed pending UFA Sergei Gonchar to a two year $5 million extension, Dallas will be looking to make some room along their blueline. Many seem to feel new GM Jim Nill will look to shipping off Trevor Daley but with four years remaining on his deal and still only twenty-nine years of age, keeping him in the Big D might not be such a bad move.

At thirty-six, Robidas is heading into the final year of his four deal and will likely not be in the Stars plans moving forward. While the former seventh round pick is not the same player he once was, the thirteen year vet is still more than capable of playing top pairing minutes. He has been used in all situations for the last number of years in Dallas but with the addition of Gonchar and emergence of Brenden Dillon, that will likely no longer be the case.

Like Phoenix, the Stars are in need of help upfront and also have a ton of cap space tied up in their backend. Tough to say what would work for Nill in such a deal but my guess is the two sides could work something out, be it a roster player, prospect or draft pick. Also, should Dallas want a short term replacement for Robidas to be part of any sort of package, Nick Schultz would fit that bill perfectly. While the two have similar cap hits for 2013-14, Schultz makes $650,000 more in real money, something the Oilers would surely pick up, if not a little more, as part of any deal.

Adding such experienced defenders into the mix, would give Edmonton's D core the makings of a fairly well balanced group. MacTavish's desire to upgrade his blueline's puck moving ability would instantly be addressed, with Smid being the only non puck-mover in the group. It may not be the perfect solution but it sure would give the Oilers a legitimate shot at improving in the standings, while still allowing their younger players time to adjust and develop into "proven NHL calibre defencemen".
Posted by Oil Drop at 2:19:00 pm