There is zero chance of Cory Schneider becoming an Edmonton Oiler 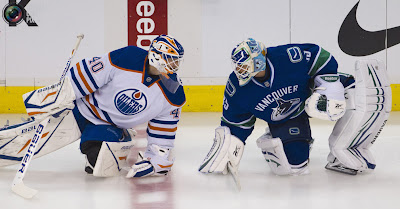 Vancouver Canucks general manager Mike Gillis, stubbornly refused to entertain possible trade offers for netminder Cory Schneider following his club's dismissal from the 2012 Stanley Cup Playoffs. Just over a year later, he has apparently had a change of heart, after failing miserably in trying to move veteran Roberto Luongo.

On the eve of the 2013 NHL Entry Draft and with no apparent end in sight to the Luongo Saga, Gillis made it known he would consider any and all serious offers for his twenty-seven year old netminder. Not surprisingly, Edmonton Oilers GM Craig MacTavish sounds as though he was one of those who inquired about Schneider's availability but one would think the Canucks would have no interest in moving him to a division rival. Unless of course, the Oilers were willing to drastically overpay...something which simply won't happen under MacT's leadership.

While he has been solid during his first three years in the National Hockey League, Vancouver's asking price for their "young" tender, is rather steep. With Schneider signed for the next two seasons at $4 million per and entering what should be the prime years of his career, this should come as no real surprise.

In 98 career outings, the former first round pick has posted a 55-26-8 mark with a 2.20 GAA and .927 SV%. Nice looking numbers but at the end of the day, are they worth trading away your first round pick and a prospect? That was apparently what Gillis was hoping for in return for Schneider and one can only guess how much more the ask would be from the Oil.

If this were last off-season, Vancouver probably would have had teams lining up to take a run at the former Manitoba Moose standout. However, after his dreadful performance during the 2013 post-season and his inability to come up big at crunch time, Schneider has slipped a notch or two in the minds of some. One can understand the Canucks wanting what they deem to be full value but a top ten pick and a late first rounder, do not equate to the same thing.

In order for the Edmonton Oilers to seriously consider moving the seventh overall selection, they would need to address either their blueline or lack of depth at centre. Moving that pick in exchange for a goaltender who's the same age as current starter Devan Dubnyk and frankly just as unproven, would have to be a deal breaker for MacT and company.

With the Oilers having already shown interest in Jonathan Bernier and now Schneider, it's obvious the rookie GM is not sold on Dubnyk as their guy moving forward. Having said that, Edmonton's priority should and likely will remain the same. Meaning Cory Schneider has absolutely zero chance of becoming a member of the Edmonton Oilers.
Posted by Oil Drop at 12:08:00 am