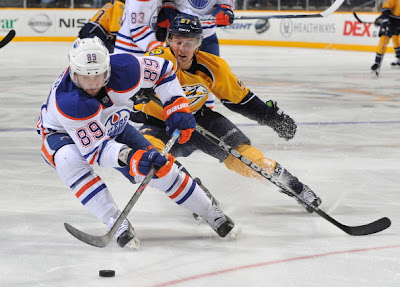 After agreeing to a one year deal at $3.2 million the previous season, the former sixth overall pick was headed for a hefty increase. Coming off what was easily his best season in the NHL, at least from a point production standpoint, Gagner was going to get his money. Be it in the form of an extension with the Oilers or via unrestricted free agency next summer.

That being said, it was ultimately up to the former London Knights standout as to whether or not he would remain in Orange and Blue. Like every player, #89 wanted his payday and rightly so. However, with the organization obviously having a number in mind, nothing north of $5 million, the decision was Gagner's to make. While he did get the "no movement clause" he wanted, he left a ton of money and term on the table, to remain a part of the only NHL organization he has ever known.

As far as the Oilers are concerned, things could not have turned out any better. While Craig MacTavish has done nothing but praise the twenty-three year old since taking over as general manager, it's pretty clear they see Sam as a second tier piece of the puzzle. If they were sold on Gagner being the answer as their second line centre behind Ryan Nugent-Hopkins, he would have been inked to a five year deal...at the very least.

Instead, MacT managed to put together a deal that will see Gagner earn $4.4 million in 2013-14, with the remaining two years coming in at $5 million and removing all fear of pending free agency. While the package did include the aforementioned "no movement clause" , it does not kick in until year two, and doesn't carry over to year three. Meaning, if he continues to be a liability in his own end of the rink and/or regresses from a points standpoint, he can easily moved at that number.

Is that the plan moving forward? Of course not but the Oilers rookie GM has at least left the door open, should the need arise. Also, the term gives them nothing but flexibility to do whatever might be necessary, to improve this roster in future years. Should Gagner be willing to do the necessary work to transform himself into a 200 foot player, he is going to remain in Oilers silks for years to come. That simple.

There is no question that both the Edmonton Oilers and Sam Gagner wanted to continue their "partnership"  beyond the 2013-14 season. As it turned out, today's signing was pretty much a win-win situation for both the player and club. Having said that,  don't be surprised if Craig MacTavish and company have themselves a celebratory drink before the day is out.
Posted by Oil Drop at 10:23:00 am