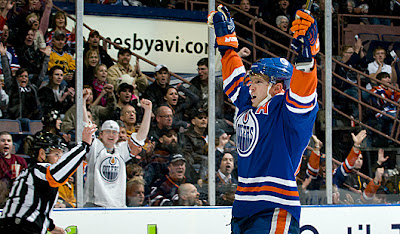 His biggest move to date, was bringing in former St. Louis Blues forward David Perron in a trade for Magnus Paajarvi. In my mind, giving up on the talented Swede was a mistake but the deal made perfect sense for the here and now. There is no question the twenty-five year old is an upgrade on Paajarvi for the coming season but is he really much of one over Ales Hemsky?

With the talented Czech likely on his way out of town, Perron will take his spot inside Edmonton's top six forwards and probably put together a pretty decent season. Yet, will the Oilers truly be any better off for it? Do the same issues still not exist within the club's top two lines? They still lack size, they still have two centres who can't win a faceoff and will likely still be man handled by many a Western Conference opponent.

To say Hemsky has had a bit of a rough go of things over the last four seasons, would be putting it nicely. He can still produce points on a fairly regular basis, when being used in a top six role, but injuries have played a major factor in his production dipping. There are those out there that feel the former thirteenth overall pick doesn't play hard enough and is a so-called "soft" player.

While you could make the argument that #83 isn't as engaged as often as he should be, implying he doesn't compete on the ice, is simply inaccurate. Outside of Taylor Hall, not other Oilers player attacks the opposition with such reckless abandon and disregard for his own safety as the two-time seventy point man. Ales Hemsky may be many things but "soft" is not one of them.

That being said, Hesmky would probably benefit from a change of scenery and Edmonton badly needs to make room for Nail Yakupov on the top two lines. Both guys are top six forwards and both are right wingers. Easy solution...enter David Perron.

With two twenty-goal seasons already under his belt and having never scored fewer than fifteen over a full 82 game campaign, Perron can clearly but the puck the in the net. His ability to almost do whatever he would like with the puck, makes him a duel threat and a very nice compliment to the Oilers ultra-skilled top six. Like Hemsky, the former twenty-sixth overall pick is more than willing to go into the "dangerous" areas on the ice to score and has also had deal with his fair share of knocks, including a lengthy stint on the sideline, courtesy of a concussion.

That aside, bringing in a player with Perron's skill-set to a group that already includes Jordan Eberle, Sam Gagner, Hall, Ryan Nugent-Hopkins and Yakupov is definitely a solid addition. However, as a collective group, they are no more difficult to play against. The two positives gained in making the swap, Yakupov getting a full season on right wing and adding another potential scorer in Perron.

The only one in the group that excels in his own end of the ice is Nugent-Hopkins. The trio of Eberle, Hall and Perron are nothing more than serviceable in their half of the rink, while Gagner and Yakupov generally need a compass in Oilers zone. None of them play a physical style of game and they all tend to struggle when being consistently leaned on by the opposition, though Hall, Perron and even Yakupov have shown the willingness to fight through the pounding...but so did Hemsky.

Bringing us back to the initial question: Are the Edmonton Oilers any further ahead with David Perron in their lineup over Ales Hemsky? In the long run, the answer to that question would probably be yes but for the coming 2013-14 season, can't see how they would be. Downgrade? Definitely not. Sideways move? Most likely, which is probably not what most people want to hear but doesn't change the fact that it's true.
Posted by Oil Drop at 9:23:00 am