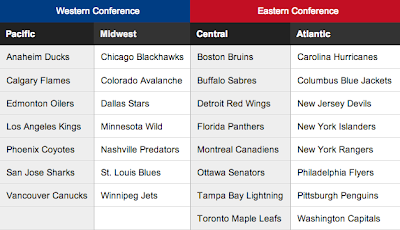 At first glance, losing the Minnesota Wild and Colorado Avalanche as divisional foes and gaining the quartet of the Anaheim Ducks, Los Angeles Kings, Phoenix Coyotes and San Jose Sharks doesn't look overly favourable for Craig MacTavish's crew. Having said that, Edmonton has managed to remain competitive against all four over the last couple of seasons, giving them more than a little hope of earning a potential post-season spot.

With the Columbus Blue Jackets and Detroit Red Wings having both shifted over to the Eastern Conference, one a perennial playoff team and the other on the upswing, the Oilers are automatically ahead of the game. In my mind, the Winnipeg Jets will have their struggles transitioning to the Western Conference style of game and not be much of a threat for a playoff spot in 2013-14. Definitely a win-win situation.

Heading into next season, the top two teams in the Pacific look to be Los Angeles and Vancouver, with Chicago and St.Louis leading the way in the Midwest. The Colorado Avalanche, Dallas Stars and Nashville Predators should all be better in '13-'14, while the Minnesota Wild could go either way. One would think the Stars and Wild would fight it out for that all important third seed, leaving the Avs, Jets and Predators on the outside looking in.

Most would suggest the top four in the Pacific will consist of the Anaheim, LA, San Jose and Vancouver. Pretty hard to argue but I am not sold on either the Ducks or Sharks being a "sure-thing". That said, they are clearly the cream of the crop heading into next season. Meaning Edmonton would have to finish in front of the Calgary Flames and Phoenix Coyotes in their own division, while insuring they remain ahead of the loser of the Stars vs Wild battle.

Surely there will be those who will point to the Oilers inter-division match-ups being far more taxing than their old Northwest schedule but is that really true? They lose out on playing the Avalanche, who they have generally dominated over the last couple of years, but should replace those wins against the Flames, who they have always had trouble with. The team they have struggled the most with in recent memory, Minnesota, will no longer be around but the Canucks remain part of the picture.

Despite the general consensus being new bench boss Dallas Eakins will have his work cut out for him against the likes of the Coyotes Ducks, Kings and Sharks, the Orange and Blue have managed to hold their own against their new division rivals, over the last couple of years.

Looking at those results, there is nothing that screams they are in deep trouble. If we were talking about a playoff series, it would be a totally different story but we are not. Bigger bodied teams generally have a lull or two over the course of an 82 game NHL schedule, meaning the Oilers should be more than capable of sticking around in the vast majority of their contests. Obviously the team needs to take another step forward in their development in 2013-14, which goes without saying, but that would have been the case in any division.

Like every other team in the National Hockey League, for the Edmonton Oilers to have any chance of reaching the Stanley Cup Playoffs, they will need to get production out of their best players. They need huge seasons from the usual cast of characters in Devan Dubnyk, Jordan Eberle, Sam Gagner, Taylor Hall, Ryan Nugent-Hopkins, Jeff Petry, Justin Schultz, Ladislave Smid and Nail Yakupov, while hoping newcomers Andrew Ference, Boyd Gordon and David Perron all come in and make major contributions in Oilers silks.

At the end of the day, it will come to down to just that. On ice performance will dictate how this team ultimately does, not the division they find themselves in. Be it earning an eventual playoff spot or falling just short, the time has come for some marked improvement in the standings. That simple. No more excuses.
Posted by Oil Drop at 8:42:00 pm