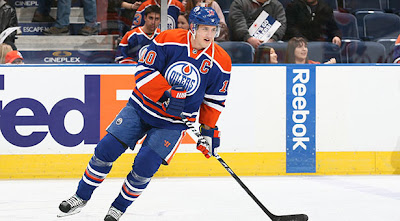 Edmonton Oilers captain Shawn Horcoff will have a new home at some point on Friday morning. Word is the veteran centre has been traded to the Dallas Stars, in exchange for a 2016 seventh round pick and defenceman Philip Larsen. Not exactly a king's ransom but a return which should have been expected, considering the Stars agreed to taken on his entire $5.5 million cap hit, for the next two seasons.

Unfortunately for Craig MacTavish, trading Horcoff and his exorbitant cap number, was always going to be a losing proposition. No matter what he did, MacT was not getting anything close to full value for the five-time fifteen goal man. If anything, the fact the rookie GM completed a swap without having owner Darryl Katz eat some salary, speaks volumes of just how good a player the Oilers #10 still is.

While the former fourth round pick had always been somewhat of a fan favouirte during his first eight years in Oilers silks, that all changed prior to the 2009-10 campaign, after signing a six year/ $33 million extension. In hindsight, it was deal former general manager and current President of Hockey Operations Kevin Lowe would love to have back, as it placed unreal expectations on the shoulders of the former Michigan State Spartan.

As the Oilers highest paid player, many fans were expecting Horcoff to not only lead the team in scoring but also continue be that two-way force, that helped lead Edmonton to a Stanley Cup Final berth back in 2006. Not exactly the easiest of tasks and one made far more difficult, by the lack of legitimate NHL players around him.

Edmonton tried to "re-load" their roster for the '09-'10 season, in hopes of getting back to the post season for the first time since 2006. However, the combination of many players under performing and a ridiculous run of injuries, sent the season spiralling out of control. At that moment, the organization decided to go the route of an all out rebuild. It was the right move to make for the franchise but one that ultimately sealed Horcoff's fate.

He was one of those players that underperformed and battled injury during 2009-10 but the hope was he would bounce back in 2010-11. With the club deciding to go a different direction, returning to his near point a game pace of 2005-06 and 2007-08, seemed unlikely but the pressure grew further, as Shawn was named the thirteenth captain in club history on October 6th, 2010.

From that point on, it would be a losing battle. As the team continued to plummet down the Western Conference standings, Horcoff became the "whipping boy" for large chunks of the fan base. As the team's highest paid player and captain, he was an easy target but not always a deserving one.

While his production unquestionably slipped, he was forced into a situation that guaranteed failure. It was a tough situation for both the organization and the player but that mattered little to the vast majority in Oil Country. Yet you never heard a negative word come out of Horcoff's mouth. Be it the lack of NHL ready talent on the roster, the organization or the overall predicament he suddenly found himself in. Not a word.

He has unjustly taken the brunt of criticism for the club's failures in recent years, when failure is exactly what they were after. While fans and media continued to take jabs at the captain, he remained focused on the job at hand. Help develop Edmonton's young prospects, into quality National Hockey League players and lighten the load whenever possible. Horcoff did just that until the bitter end and contrary to what some will have you believe, the players in that room hold him in high esteem.

Players are not dumb, they see what he had to put up with on a daily basis and he did it for their benefit. It's no coincidence a guy like Sam Gagner took to twitter on Thursday night with the following message, after news broke of Horcoff's departure:

"Tough to see Horc go. I've learned so much from him over the years. Dallas got a great professional and teammate today. #Leader"

People can say what they like about Shawn Horcoff as a player. Was he ever worth the money he signed for back in 2009? Not a chance but he was always a useful player and did whatever was asked of him. It was always about the Edmonton Oilers with the soon-to-be thirty-five year old and never about the individual. Frankly, the organization were fortunate to have him stick around as long as he did.

That being said, it was time for change. A player can only take so much losing. At some point, you need a fresh start and hopefully he will get exactly that in Dallas. In my mind, the likes of Jordan Eberle, Gagner, Taylor Hall, Ryan Nugent-Hopkins and Nail Yakupov will all be better NHLers for having played alongside Shawn Horcoff, making his time in the Orange and Blue far more than valuable than any number on contract.
Posted by Oil Drop at 5:03:00 am