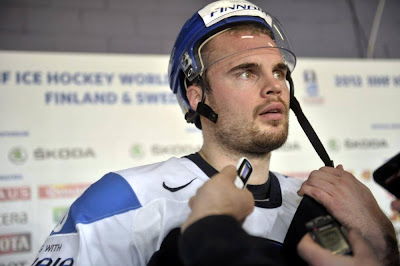 After accomplishing little during his time on Long Island, the #60 overall pick of the 2006 Entry Draft was allowed to simply walkaway from the organization and become an unrestricted free agent. The 6' 4" and 210 pound winger is coming off a nice year with Assat Pori in the Finland SM-liiga, putting up twenty-five points in twenty-four games, but no one really knows what to expect from him come 2013-14.

Clearly the Oilers pro scouts saw something they liked in the twenty-five year old's game, offering him a multi-year deal with the hopes of him claiming a regular spot inside Edmonton's bottom six forward group. Joensuu has been known to through his weight around the rink on more than one occasion and has shown a bit of a knack around the net, albeit in Europe, opposed to the National Hockey League.

According to MacTavish, he views the feisty winger as an upgrade over a pair of recently departed Finns, in Teemu Hartikainen and Lennart Petrell. Edmonton are counting on the combination of him willing to do almost anything to secure regular NHL duty, along with his ability to play a far more consistently grinding style of game, ultimately making him a better fit than either of the recently departed Hartikainen or Petrell. That simple.

Is anyone expecting Joensuu to come in here and become a twenty goal scorer? Let's hope not but expecting somewhere in the neighbourhood of 8-12 goals, on top of the other intangibles he should be able to bring to the table, should not be asking too much. Should he earn a spot on the Oilers third line, as things currently sit, he would find himself playing alongside Boyd Gordon and Ales Hemsky. In my mind, there is little chance #83 returns to town in 2013-14, meaning Ryan Jones would have the inside track on earning the final spot on Gordon's line.

An ideal setup? Tough to say but at first glance, probably not. However, should the Isles outcast find himself on the third line with Jones and #28 manages to relocate his scoring touch, it would not be too far-fetched to expect the trio to at least chip in offensively...something not seen in this neck of the woods for some time. The guy is going to get an opportunity to show what he can do and it will be up to him to win a job.

Make no mistake, the club's expectations for Joensuu are pretty clear. He was brought on board to be a top nine guy. Could they live with him being played further down the lineup, as a fourth line option? Perhaps but outside of Hemsky - Jones duo possibly pushing him down the depth chart or former Toronto Marlies winger Ryan Hamilton flat out stealing a third line spot at training camp, there looks to be little standing in his way.

In a perfect world, the Edmonton Oilers see Jesse Joensuu turning into that player the New York Islanders will one day kick themselves for having let go. No one is expecting him to come in here and light it up. All they need, is for him to simply turn into a solid everyday NHLer. If Joensuu can go out and accomplish just that, Craig MacTavish will look like a genius for taking a flyer on a player that was frankly on no ones radar, heading into unrestricted free agency.
Posted by Oil Drop at 9:37:00 am