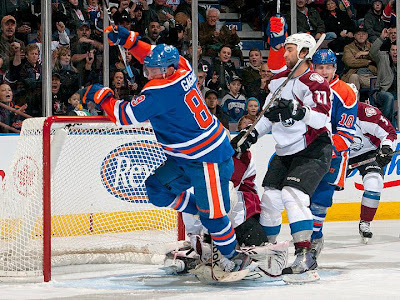 With a team that already features a pair of $6 million players in Jordan Eberle and Taylor Hall, as well as a pretty impressive trio of Ryan Nugent-Hopkins, Justin Schultz and Nail Yakupov all likely headed for similar sorts of deals over the next couple of years, adding a $5 million cap hit for a player with Gagner's skill set makes no sense. With the two sides scheduled to kickoff the NHL salary arbitration season on Monday afternoon and the former sixth overall pick reaching for the moon, this could get ugly...if the Oilers aren't careful.

In my mind, having your fifth or sixth best forward making that kind of money over a four to five year period, is nothing but a recipe for disaster.

Heading into the upcoming season, there is not a single team that currently pays the fifth best forward on their roster, that type of coin. The two that come closet, not surprisingly, were this year's Stanley Cup Finalists. The Chicago Blackhawks have their quartet of Marian Hossa, Patrick Kane, Patrick Sharp and Jonathan Toews all making between $5.25 million - $6.3 million, with Bryan Bickell coming in fifth, at $4 million. However after Bickell, the forward ranks include two players making between $1million - $1.325 million and a bunch of guys under the million dollar cut line.

Over in Beantown, the Bruins have the likes of Patrice Bergeron, Jarome Iginla, David Krejci and Milan Lucic all slotted in between $5 million - $6 million for the coming season, with Brad Marchand knocking on the door at $4.5 million. The difference with Boston, is Iginla is on a one year deal and not a long term extension. Also, both teams will have some tough decisions to make prior to the completion of the 2014-15 campaign, when Kane, Krejci and Toews would all be set to become unrestricted free agents.

Pittsburgh pays the trio of Sidney Crosby, Evgeni Malkin and James Neal north of $22 million but no other forward cracks the $4 million mark. The Red Wings signed Stephen Weiss to $4.9 million pact, joining Daniel Alfredsson, Pavel Datsyuk and Henrik Zetterberg in the upper echelon of Detroit's payroll but just like Iginla in Boston, the longtime Ottawa Senators captain is on a one year deal. San Jose currently have four players over the line but have two of them set to become UFA'S following the 2013-14 season, when Logan Couture's 5year/$30 million deal kicks in.

Are you sensing a bit of a pattern here? No other team is paying their second tier players at that level, so why would the Oilers?

The other thing to keep in mind, all of the aforementioned teams have "different types" of players inside their respective top four or five. In Edmonton, that clearly isn't the case, which will ultimately force general manager Craig MacTavish, to badly overpay for bottom six help. The perfect example, being Boyd Gordon. While the former Phoenix Coyotes face-off specialist was grossly overpaid by the Oilers via free agency, it was a move the organization simply had to make. At the moment, the overpayment doesn't effect them but in a year or two from now, it would be the type of contract that would truly hamper the GM from doing his job to the best of his abilities.

Is the salary cap going to go up? Of course it will but at some point, it will "cap out" and it won't be much higher than last year's record total of $70.2 million. By signing a player like Gagner to a lengthy extension, the Oilers would be doing nothing but handcuffing themselves in the future. Three years from now, I fully expect Nugent-Hopkins to be one of the best two-way centres in the game but until he is ready to take on that role, what is this team supposed to do? Going to war with arguably the smallest top two centre tandem in the NHL, over the next handful of seasons, would not be the wisest of moves.

When the time comes to sign RNH and Yakupov, Edmonton would be coughing up somewhere between $5.5 million - $6 million for each of the former first overall selections. Should they ink Gagner to a $5 million deal , the Oilers would be paying their top six forwards, including recently acquired David Perron, somewhere in the neighbourhood of $32 million by 2015-16.

Add another $25-$30 million to cover the cost of the blueline and a pair of netminders and they are suddenly setting in the low $60 million range. Obviously, that number does not includes any bottom six forwards but if you were to remove Ales Hemsky from their current cap hit, slots 7-13 are going to cost Edmonton roughly $10 million next season. That puts them well over the 2012-13 cap ceiling and with a third and fourth line that very few are happy with.

In order for Gagner to be worth the sort of money he is apparently seeking in a long term deal, the former London Knights standout would, at the very least, have to become a bona fide 60 point player. With the deficiencies in his overall game being what they are, anything short of that sort of production would make the signing a major mistake. To this point in his career, has Sam shown anything that would lead us to believe he could consistently achieve those totals?

Over an 82 game schedule, a player must average .732 PPG to reach the 60 point plateau. Gagner bettered that mark last season, posting  a .792PPG total over an abbreviated 48 game schedule, that saw him get more than his fair share of fortuitous bounces for much of the season. He also had the good fortune of receiving far more "top line opportunities" than he would generally get, with a healthy Nugent-Hopkins at the coaching staff's disposal.

Unless the organization's eventual plan is to trade one of Jordan Eberle, Taylor Hall, Ryan Nugent-Hopkins or Nail Yakupov for pieces currently missing from the Edmonton Oilers puzzle, I just can't see how committing to Sam Gagner at $5 million, makes any sense whatsoever. Good player...wrong fit. That simple.
Posted by Oil Drop at 11:59:00 am