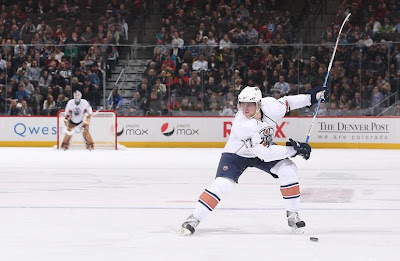 As of right now, the top four spots unquestionably belong to Andrew Ference, Jeff Petry, Justin Schultz and Ladislav Smid. Should the Oilers decide to keep Nick Schultz around for the final year of the six year extension he signed as a member of the Minnesota Wild, the veteran blueliner would be a lock for a one of the two openings on the bottom pairing.

Leaving the likes of Anton Belov, Grebeshkov, Philip Larsen and Corey Potter to battle for final spot along Edmonton's suddenly overcrowded blueline. MacT said he wanted a healthy competition for those "5 through 8 spots" on the backend and he looks to have accomplished just that. One would think the two Russian rearguards would have the inside track at grabbing those #6/#7 roles but you never know.

Bringing us to the wild card in all of this...Oscar Klefbom. I have said for some time that the Oilers would be doing the youngster a disservice by rushing him to the National Hockey League. With MacTavish bringing in as many options as he has, the likelihood of that occurring should be absolutely zero. One would think the plan would be for the the former nineteenth overall pick to go down to the American Hockey League and allow him time to adjust to both living and playing in North America.

Having said that, should Klefbom come to camp and clearly demonstrate he is not only ready to be an everyday player but also push for time inside the top two pairings, the club may have to seriously reconsider their stance. At twenty years of age, the big Swede isn't exactly a teenager coming out of the Entry Draft and trying to crack an NHL roster. Who knows, maybe he is capable of taking that step directly into the National Hockey League in 2013-14.

Should that prove to be the case, so be it. As long as the organization isn't force feeding him a role he is not quite ready for, no one could have issue with him making the cut out of camp. If Klefbom proves to be that much better than the guys currently ahead of him on the Oilers depth chart, he should be given every chance to show what he could do. If not, a little seasoning with the Oklahoma City Barons should do him nothing but a world of good.