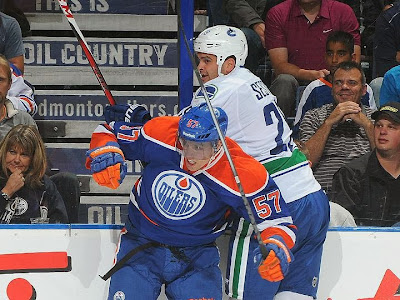 
Newcomer David Perron continued to impress, chipping in with a goal and an assist and playing yet another solid all around game for his new team. However, the story on the night was the play of local area product Ty Rimmer, who was making his NHL debut against the Canucks. The former Lethbridge Hurricanes standout looked very good in stopping ten of the eleven shots fired his way, in earning the win.

Despite being more than a little undermanned, Vancouver would actually open the scoring at the 1:20 mark, as Mike Santorelli squeaked one through Oilers starter Jason LaBarbera. Not exactly the start Edmonton was looking for but it was just what John Tortorella's young side needed.

From that point on, the Canucks turned up the intensity a notch or two, banging bodies all over the ice and, for the most part, keeping pace with an Oilers lineup that featured almost two-thirds of what will likely be their opening night roster. Unfortunately for them, it didn't last and would lead directly to what seemed like an endless parade to the penalty box.

Sam Gagner would even things up on what was the Oilers the third power play in the opening twelve minutes, tapping home a lovely cross-crease pass from Perron behind a helpless Eddie Lack. In what was a bit of an odd night for Edmonton's power play, they finished up just 1-for-8 but were downright dangerous every time they hit the ice. The finish wasn't up to par but than again, that is what the exhibition schedule is for.

The Oilers would grab their first lead of the night early in period two, as Perron finished off on odd-man shorthanded rush, batting home a rebound after Lack stopped Taylor Fedun's initial shot on goal. The former St.Louis Blues forward has been a mainstay on the Oilers kill throughout the preseason and has added a dimension of speed and a potential scoring threat to the PK...something that has been lacking for sometime in the Alberta capital.

After watching LaBarbera fight the puck for the first thirty minutes of action, Rimmer looked calm, cool and collected in between the pipes. The twenty-one year old wasn't heavily tested but unlike his predecessor, he was called upon to make a couple of big stops to maintain Edmonton's one goal cushion.

Ryan Smyth appeared to put this one to bed late in the third, knocking home his second of the preseason from his usual office in front but Jannik Hansen would respond less than minute later, to cut the lead back  down to one. However this time, it was Edmonton who would respond in short order, as Nail Yakupov would score goal number four, all of forty-nine seconds after Hansen trimmed the lead

The duo of Ryan Hamilton and Jujhar Khaira did all the work down low, cycling the Canucks to death in their own zone, before Khaira found a streaking Yakupov with an absolutely gorgeous feed, which the former first overall pick wasted little time ripping past a helpless Lack. Will Acton would close out the scoring, potting his first of the preseason into an empty net and sealing the victory.

As far as Belov goes, the KHL standout didn't look the least bit out of place and showed flashes of his puck moving abilities throughout his eighteen minutes of ice-time. With the Oilers having three preseason games left on their schedule, don't be surprised to see the Russian rearguard get into to all three, as head coach Dallas Eakins will need to know exactly what he has to work with heading into the season opener.