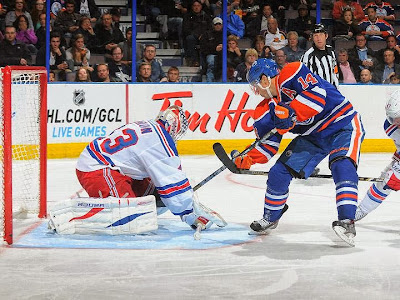 Eberle paced the offence upfront with a goal and two assists, leaving him with a team high of eight points, while Perron found the back of the net twice, pushing his team leading goal total to five on the preseason. As far as their linemate goes, he appears ready to make the most of an opportunity, courtesy of Zack Kassian and Sam Gagner's broken jaw.

After putting together his best all around performance of the exhibition campaign in Monday's win against the Winnipeg Jets, the diminutive centre followed it up with another solid effort on Tuesday night. His two point night now gives him four in five games and all but solidifies his spot on the Oilers opening night roster on October 1st.

Despite having reeled off four straight wins, Edmonton had to come from behind for third consecutive time, as their first period struggles continue. Defenceman Marc Staal would opening scoring eight minutes in, as his point shot found its way in behind starter Jason LaBarbera, giving the Rangers the early advantage. Unfortunately for them, the lead would be short-lived and their only one of the night.

Taylor Hall would square things up at the 12:47 mark, with what was essentially a power play goal for the Oilers budding superstar. Hall deflected home a perfect point shot/pass from Justin Schultz, up and over Rangers starter Martin Biron, exactly four seconds after Chris Kreider made his way out of the visitors penalty box. It was an absolute gorgeous finish from the former first overall pick, as Edmonton were in complete control for almost the entire man advantage.

Perron would give the fans a little more to cheer about before the period was out, beating Biron high on the gloveside with a perfect redirect, after receiving what was a picture perfect lead pass from Arcobello, The go-ahead marker came with all of thirty-one seconds left in the frame and gave Edmonton the spark they were looking for.

The former St. Louis Blues marksman would pot his second of the night just over a minute into period two, with New York's Arron Asham in the box for the seldom called face-off violation, which came at the twenty-eight second mark of the middle stanza. In what has become a nightly theme for the Oilers through much of the preseason, it was another goal from a deflection, as Perron tipped Jeff Petry's point shot past a helpless Biron, to make it 3-1 for the guys in Orange and Blue.

The Rangers wasted little time in getting that one back, as J.T. Miller would make the most of an ugly rebound from LaBarbera, erasing Perron's insurance marker exactly 1:03 later. After fighting the puck for much of his last outing, the former Phoenix Coyotes backstop was hoping for a bounce back performance against Rangers.

Ben Eager would restore Edmonton's two goal cushion midway through the period, as his shorthanded blast ricocheted off the post into Brion's back and across the goal line for a 4-2 Oilers lead. It was a tough break for the Rangers but one that Eager had coming his way. The rugged winger has impressed throughout much of training camp, as he attempts to win back the roster spot he lost during the 2013 season.

To their credit, New York came out on fire to start the third but were unable to sneak an early one past LaBarbera, as the Oilers #2 put together what was easily his strongest stretch of the preseason. Despite being territorially dominated for much of the period, Eberle would increase the lead to three, wiring home an splendid feed from Darnell Nurse to make it 5-2.

It was yet another brilliant play from the rookie blueliner, who has done nothing but surprise everyone during this year's training camp and exhibition schedule. Despite being all of eighteen years old, the kid has easily been one of Edmonton's best defencemen and earned himself an extend look late into September.

That said, following tonight's game the Oilers did the right thing and announced they had decided to return Nurse back to Sault Ste Marie Greyhounds of the OHL. Edmonton also announced they had reassigned the trio of Taylor Fedun, Anton Lander and Tyler Pitlick to the Oklahoma City Barons of the American Hockey League.

As far as Nurse goes, it may not have been the news the young man wanted to hear but in reality, it was the only move the club could have made. In the long run, it will benefit both the player and the organization for years to come. One thing is very clear, the Edmonton Oilers found themselves one helluva player with seventh overall pick of the 2013 NHL Entry Draft.
Posted by Oil Drop at 9:33:00 am