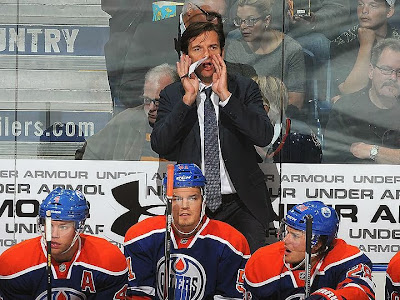 With the Oilers heading to Oklahoma City for their preseason finale against the Dallas Stars on Friday night, apparently head coach Dallas Eakins and general manager Craig MacTavish had seen enough to make the call on the five year NHL vet. While Jones was fairly productive during his first two seasons in Oilers silks, the 2013 season was a complete write-off for the former Nashville Predator.

Making Edmonton's decision to re-sign the former fourth round pick to a one year $1.5 million deal back in early July, just to send him packing all of two months later, a rather perplexing one. Considering the organization's familiarity with the player, one would have thought a seven game stint during the preseason would not have been the deciding factor on whether or not he made the club out of camp.

That said, perhaps it took them until now to finally realize they hadn't done enough to change the look of their bottom six forwards and felt Jones was no longer a good fit. Then again, Eakins may have simply not liked what he saw out of the two-time fifteen goal man and was far more comfortable going with player he was either more familiar with, see Ryan Hamilton, or guys who brought a different element to the table on a nightly basis...can you say Mike Brown and Ben Eager?

Regardless of why the club decided to go the route they did with Jones, the rookie coach has successfully trimmed the Oilers active roster down to 23 players:


They will start the season with the quartet of Sam Gagner, Denis Grebeshkov, Ryan Nugent-Hopkins and Corey Potter all on the IR list, with Nugent-Hopkins likely being the first to return to action. Obviously the absence of both Gagner and RNH creates a rather large hole inside the Oilers top six but with the off-season addition Perron and basically being forced into keeping Hemsky around for another year, Edmonton is far better equipped to deal with injuries.

While their depth down the middle is almost non-existent, name me another NHL team that wouldn't miss a beat minus their top two centres? That's right, there isn't one. Should the duo of Hall and Gordon prove capable of taking on major minutes in nearly every conceivable situation, while Arcobello holds his own offensively, Edmonton should still find themselves in the hunt for a playoff spot come December 1st.

Considering what the the reality of their current situation is, expecting anything more out the Edmonton Oilers over the first couple of months of the season would be nothing more than wishful thinking. Unless of course, the guy who wears the #40 on his back can put this team on his shoulders and carry them through the opening few weeks of the season.
Posted by Oil Drop at 7:28:00 am