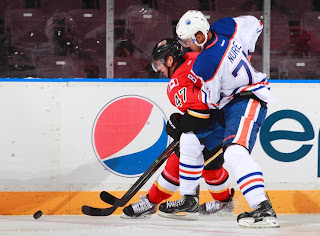 On a night in which prospects such as Oscar Klefbom and Darnell Nurse made their debuts in Orange and Blue, it was the Calgary Flames talented forward group who dominated play from the opening face-off. Markus Granlund led the charge upfront with a pair of goals, while 2013 first round pick Sean Monahan and Max Reinhart chipped in with a goal apiece, as the Flames rookies rolled over the Oilers youngsters by a score of 5-2 in Thursday night exhibition action.

Netminder Tyler Bunz went the distance in goal for the Oilers but the former Medicine Hat Tigers tender was left to fend for himself for much of the evening. Former Edmonton Oil Kings standout Laurent Brossoit got the nod for the Flames at the other end of the rink, stopping twenty-one of twenty-three shots fired his way to earn the victory.

Things could not have got off to a worse start for Todd Nelson's crew, when Nurse was handed a boarding minor just twenty-nine seconds in. While Calgary swarmed Bunz throughout the man advantage, they were not officially credited with a power play marker, as Reinhart would open the scoring all of three seconds after the Oilers top prospect returned to the ice.

Despite being badly outplayed and heavily out shot during the opening frame, Edmonton somehow still found themselves within striking distance. However that would all change before the period was out, as Granlund would score twice inside two and a half minutes, the first coming on a shot Bunz should have had and second courtesy of a gorgeous feed from Michael Ferland. Just like that the Oilers were down 3-0 scoreboard and 18-6 on the shot clock.

To their credit, Edmonton did rebound with a better effort in period two and rewarded with a pair of goals for their troubles. Forward Jujhar Khaira, who was by far and away the best Oilers skater on the night, would get his side on the board at the 9:01 mark, redirecting home Martin Gernat's point shot.

They would catch a massive break late in the frame, as Flames defenceman Ryan Culkin accidentally flipped a puck into his own net, beating a startled Brossoit. Former Oil King Travis Ewanyk was given credit for the goal and suddenly the Oilers were staring at a one goal deficit heading into period three..

Unfortunately for them, Calgary would restore their two goal cushion a mere fifty-nine seconds in, as Monahan would jump on  a loose puck and tap it into a yawning cage to make it 4-2. Emile Poirier would close out the scoring, midway through the frame, pouncing on yet another loose puck, to put this one out of reach.

Not surprisingly, the highly touted Klefbom looked a little shaky in his debut, as the twenty year old was playing his first game since hurting his shoulder last October in the Swedish Elite League. That said, look for the talented Swede to improve with each game and I still firmly believe, we will not see him at his best until the Oilers main camp, which kicks into gear next week.